What are you reading today?
Leave me your links!
Posted by Adriana C at 11:07 AM 2 comments: 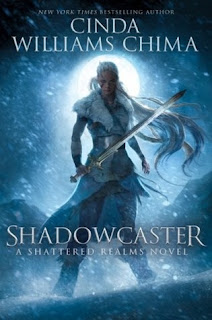 You can read my review of Flamecaster - here


Alyssa ana'Raisa is the reluctant princess heir to the Gray Wolf throne of Fells, a queendom embroiled in a seemingly endless war. Hardened by too many losses, Lyss is more comfortable striking with a sword than maneuvering at court. After a brush with death, she goes on the offensive, meaning to end the war that has raged her whole life. If her gamble doesn't pay off, she could lose her queendom before she even ascends to the throne.

Across enemy lines in Arden, young rising star Captain Halston Matelon has been fighting for his king since he was a lýtling. Lately, though, he finds himself sent on ever more dangerous assignments. Between the terrifying rumors of witches and wolfish warriors to the north and his cruel king at home, Hal is caught in an impossible game of life and death.

Set in the world of the acclaimed Seven Realms series, this is a thrilling story of the unfathomable costs of war, the allure of dark magic, and two principled and conflicted characters, drawn together despite everything they stand to lose.


Shadowcaster is the second book in the series Shattered Realms, which is the spin-off of the Seven Realms series and takes place 25 years after the end of the series.

The main character is Alyssa ana'Raisa (Lyss), Princess of the Queendom of the Fells and youngest daughter of Raisa and Han (main characters of the Seven Realms), little sister of Adrian (MC of Flamecaster) and due to the continuous war that they had have against the Kingdom of Arden for the last 25 years, she´s in the militia and is a soldier at heart, she doesn´t have time for the frivolities of the court, she´s a warrior known as the Gray Wolf, just a few know her true identity and the Gray Wolf is feared by her enemies.

Halston Matelon is a captain of Arden, his post is in Delphi, a city that is located near the border with the Queendom of Fells and because his father is a noble, whom is having disagreements the King of Arden, the life of Halston is constantly in danger, since he have to take care of threats from his enemies from the Fells and from Arden alike.

Lyss is the princess heir and future queen of the Queendom of Fells, but due to the war she has received a more militarized education since she was young and for that reason she´s a tomboy, she feels more in her element in a uniform than in dresses, she´s less feminine than the ladies at court, and she doesn´t see in herself as a future queen.

Shadowcaster is told from several points of view, but being the main ones been of Lyss and Halston. And most of the book happens almost at the same time as the events that happened in the first book of this series, for this reason the time lines of both are almost parallel, but there are some chapters of Jenna (the main character of first book), but her chapters takes place shortly after the end of Flamecaster.

On this occasion, there are many things happening at the same time, the war between Fells and Arden, betrayals in both kingdoms, besides that we know a little more about Carthis and Celestine her empress and why she´s interested in the Seven Realms, when before she didn´t have any interaction with them, nor had intervened in the war. And although I was a bit disappointed that we did not see Adrian Sul'Han from Flamecaster, I did liked that I got to know Lyss and the other new characters, in addition to expanding their world a little more. Shadowcaster is a MUST READ for fans of epic fantasy novels.
Posted by Adriana C at 9:00 AM No comments:

The Fill-In Boyfriend by Kasie West