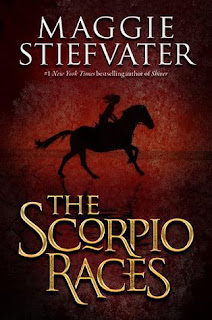 Listen the prologue and the first chapter.

It happens at the start of every November: the Scorpio Races. Riders attempt to keep hold of their water horses long enough to make it to the finish line. Some riders live. Others die.

At age nineteen, Sean Kendrick is the returning champion. He is a young man of few words, and if he has any fears, he keeps them buried deep, where no one else can see them.

Puck Connolly is different. She never meant to ride in the Scorpio Races. But fate hasn’t given her much of a chance. So she enters the competition — the first girl ever to do so. She is in no way prepared for what is going to happen.

"It is the first day of November and so, today, someone will die."

I like this book a lot because it introduces the water horses (capall uisge, kelpie) from the Celtic folklore(in the book they´re refer as capall uisce). The water horses are magical creatures from the sea that can lure humans into the sea to drown and eat them. The riders must capture these creatures and train them for the race.

Puck Connolly is the first woman to enter the Scorpio race ever, she never expects to participate but the circumstances push her to it. She has a small horse named Dove, she has it since she was a little girl, and she adores Dove and considers it her best friend.

Sean Kendrick is 19 years old, but he hasn´t have an easy live he´s an orphan since the age of 10 and had to work ever since I think that’s why he´s a very mature person. he has won the Scorpio races four times. He works as a trainer in the Malvern's barn. He´s a person of few words, that love the horses and the capaill uisce, he specially love a red stallion named Corr a capall uisce that belong to the Malvern’s, for him Corr is his best friend and he can´t even consider be without Corr. Sean is like an expert in capaill uisce and knows how to handle them, he has a lot of tricks or small magic to work with them.

I truly enjoyed this fantasy; the romance was really slow but works for me. I think here the main story was the relationship between the main characters and their horses or water horses the bond that share with them.


Book Trailer (non-official )
The Johnson County Public Library's book trailer.
I like it more than the official trailer.
Posted by Adriana C at 10:31 AM