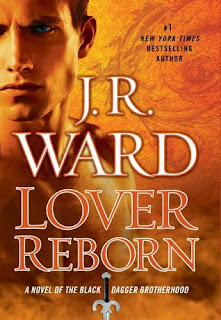 In the darkest corners of the night in Caldwell, New York, a conflict like no other rages. The city is home to a band of brothers born to defend their race: the warrior vampires of the Black Dagger Brotherhood.

Now back in the Brotherhood - and unrecognisable as the vampire leader he once was - Tohrment is physically emaciated and heartbroken beyond despair. When he begins to see his beloved in his dreams - trapped in a cold, isolating netherworld - Tohr turns to a self-serving fallen angel in hopes of saving the one he has lost. When he's told he must learn to love another to free his former mate, Tohr knows they are all doomed . . .

Except then a female with a shadowed history begins to get through to him. Against the backdrop of the raging war with the lessers, and with a new clan of vampires vying for the Blind King's throne, Tohr struggles between the buried past, and a very hot, passion-filled future . . . but can his heart let go and set all of them free?

Why I want to read this book? quite simply because I love this series!Besides this is the book Tohr, adoptive father of my favorite guy John Matthew.I ´ve read the first 4 chapters in Shelfari (no longer available) and I must have this book.

﻿Which book are you waiting this week?
Leave me your WOW link and I'll drop by.
Posted by Adriana C at 12:14 AM