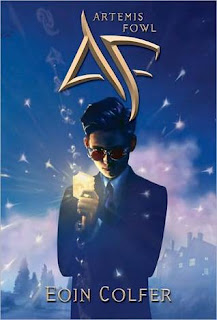 
Twelve-year-old Artemis Fowl is a millionaire, a genius, and, above all, a criminal mastermind. But even Artemis doesn't know what he's taken on when he kidnaps a fairy, Captain Holly Short of the LEPrecon Unit. These aren't fairies of bedtime stories; these fairies are armed and dangerous.

Artemis thinks he has them right where he wants them...but then they stop playing by the rules.

Artemis Fowl is a twelve-year-old criminal genius that wants to restore his family´s fortune. And how does he intend to achieve that? Well he plans to kidnaps a fairy.

This book is told from a third-person point of view and because of this I had problems connecting with Artemis, at first I didn´t get him, because if he´s so intelligent why get in trouble with magical creatures.

At first I didn´t like Artemis maybe because the narrator didn´t like him, but I liked him by the end of the book. Butler is Artemis´s bodyguard, he´s very loyal, obedient and trust completely in him. Butler is my favorite character of this book.

Artemis Fowl, is a good read, I didn´t love it but I like it and definitively reading the next book in the series. In this book you can read about of folklore and Irish mythology mixed with modern technology.

"Butler scrambled to his feet. Fairy bodies were scattered around him in various stages of shock and unconsciousness. Scared definitely. Dead, probably not. Mission accomplished."