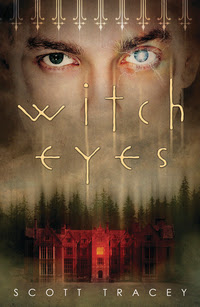 
Braden was born with witch eyes: the ability to see the world as it truly is: a blinding explosion of memories, darkness, and magic. The power enables Braden to see through spells and lies, but at the cost of horrible pain.
After a terrifying vision reveals imminent danger for the uncle who raised and instructed him, Braden retreats to Belle Dam, an old city divided by two feuding witch dynasties. As rival family heads Catherine Lansing and Jason Thorpe desperately try to use Braden's powers to unlock Belle Dam's secrets, Braden vows never to become their sacrificial pawn. But everything changes when Braden learns that Jason is his father--and Trey, the enigmatic guy he's falling for, is Catherine's son.
To stop an insidious dark magic from consuming the town, Braden must master his gift—and risk losing the one he loves.

Braden is a very powerful witch, he was born with "witch's eyes," a rare and unique gift among witches. This gift allows him to see everything that happened in a certain place, and he can see the past through magic and  can undo and do spells complicated without any problem, but having this gift comes a high price for Braden because every time his eyes are unprotected, visions of the past, magic and echoes of feelings reach to him all at once so he does not have much control and too much information at once make Braden suffers from migraines and can sometimes lose consciousness, therefore he wears sunglasses all the time, because the lenses serves as protection or filters on his "gift".

One day Braden has a vision where he sees something comes looking for him and that something kills his uncle and in that vision he sees the name of a town -Belle Dam, so to protect his uncle he decides to flee to the village. In Belle Dam he find out that is a town where two powerful families of witches who have been enemies for over a century and Braden unwittingly becomes entangled in the feud and the heads of both families want to recruit him and he wants no part in that fight, but when he meets Jason Thorpe head of a family and he discover that Jason is his father (this is already spoiled on the synopsis), he realizes that may not be able to stay out of the war as he expected.

Braden Michaels is a 17 year old who has lived all his life with his uncle John, knows nothing about his origin, or where he was born, he was home schooled and trained by his uncle in spells and everything that has to be a witch, he always uses sunglasses to protect his eyes. On his first day in Belle Dam, he meets Trey a 19-year-old, and he´s constantly bumping into him (stalkerish much) and Braden ends up falling for him. I must say that I really don´t like the character of Trey, and he believes blindly in his mother and put above her everything and everyone. I´m not saying that Braden is perfect and has no flaws, because he has them, but I felt him more in love with him than Trey.

In Witch Eyes the romance is not the main part of the story, but its important, I feel that the story focus more on magic, in all other paranormal elements as Braden discovers that in that town existed someone else the same "gift" that him, So he begins his investigation into this witch and he realizes there is something dark and sinister in the town of Belle Dam This book reminded me a little the story of Romeo and Juliet, but in this case is a gay romance. I really enjoy this book.