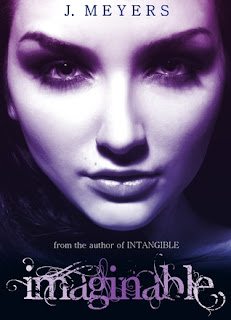 You can read my review of Intangible - here


Twins Sera and Luke Raine’s unusual abilities are growing. Sera is healing vampires now, making them human again. And, at times, Luke can actually change the future he Sees.

But Sera’s healing has dangerous consequences, and though Luke is altering the outcome of more visions, he can’t control them yet.

Now Sera is in danger as the dark creatures of the Realm seek to use her. As Luke struggles to master his gift in order to save his sister, he discovers even more about his powers.
And what he learns just may put him in greater danger than Sera has ever been.


Imaginable begins a few months after the events in Intangible, twins Luke and Sera, continue to discover a little more about their "gifts",  Sera with her gift of healing by a simple touch, realizes that her gift can bring more problems than she thought because she cannot only cure humans, but she also is turning vampires into humans and they do not stop asking her to convert them, but this could be dangerous not only for herself but for all the people she cares about. And meanwhile Luke tries to find a way to force his visions with the intention of preventing them, because if he could change the future, maybe his "gift" is not as useless as he thought.

Imaginable is told from multiple point of views, the main been Luke´s and Sera´s, but we also got Fey and Jonas´s POVs.

I really liked this book but not as much as the first book, this time Sera annoyed me a little bit, she keeps lamenting, ignoring the warnings of Jonas and she is unable to say NO, most of her problems is because she can´t say NO. But Luke balances it a bit, he´s still as cocky (but as a joke)  an in the first book, but I love how close they´re and how the can understood each other without words. And my favorite character of the series is Jonas!, He is a vampire and he is super protective of Sera and finally there´re sparks between them, so I hope these two end up together, as well as Luke and Fey.

Overall, I enjoyed this book, although there were times in the story when Sera was not my favorite person, but the story is good, entertaining and I can´t wait to see how is going to affect their lives the new change in Luke´s visions. I definitely can´t wait to read the third book in the series.
Posted by Adriana C at 3:01 PM