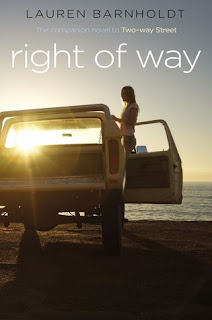 
Can a road trip repair a romance gone wrong? Find out in this standalone companion to Lauren Barnholdt’s Two-way Street.

Here are Peyton and Jace, meeting on vacation. Click! It’s awesome, it’s easy, it’s romantic. This is the real deal.

Unless it isn’t. Because when you’re in love, you don’t just stop calling one day. And you don’t keep secrets. Or lie. And when your life starts falling apart, you’re supposed to have the other person to lean on.


Right of Way is the companion novel of Two-way Street and therefore I wanted to read it to find out what happened with Jordan and Courtney, if they end up together, how they were, and so on. In this book, Peyton the female protagonist is Courtney´s  cousin and story begins the day after a wedding she attended and there she meets with her ex-boyfriend Jace, a boy with whom she had a long distance relationship since he lives in Florida and she in Connecticut. She had plans to travel with a friend but that friend didn´t arrived, so she is left stranded in Florida with no way to return home, so Jace offers to take her to Connecticut and so begins the road trip begins! Peyton is not too happy at first, but she sees no other alternative.

This book is entertaining and I´ve liked lately contemporary books about road trips. The story is told from the point of view of Jace and Peyton (Alternating between them) and it begins in the present when they are no longer dating, but it also has several chapters that take place months before, when they met for the first time on Christmas vacations and how they met and we can see a little of their instant romance and they´re also another chapters that takes place after they broke up and we see how they go about their lives in their respective cities and how they keep obsessing with each other.

Overall, it's a light and fun read. And the character that I liked most was Jace, and he is super cute, sweet and a little more mature than Peyton, she is insecure, a little self-centered and very immature. What I didn´t like was the open ending (I don´t like open endings) and I felt it a little rushed, I would have liked a little more information about what happen next.


I received an eARC of this book from the publisher via Edelweiss in exchange of an honest review.
Posted by Adriana C at 5:26 PM