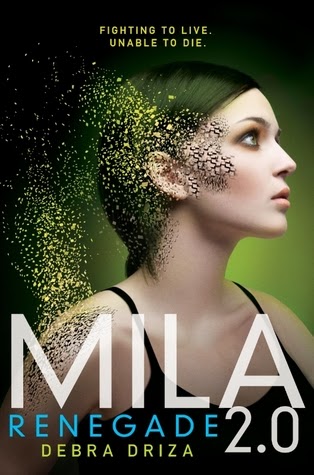 
There is no one left for Mila to trust. Except for a boy she barely knows.

But Hunter has no idea who—and what—Mila really is. She can’t bear to reveal her secret, even though he’s unwittingly joined her search for Richard Grady, a man who may know more details of Mila’s complicated past.

Yet the road to the truth is more dangerous than ever. With General Holland and the Vita Obscura scouring the earth for her whereabouts, Mila must rely on her newfound android abilities to protect herself and Hunter from imminent harm. Still, embracing her identity as a machine leads her to question the state of her humanity—as well as Hunter’s real motives.

Perfect for fans of I Am Number Four and Divergent, this action-packed and heart-wrenching second installment of MILA 2.0 will leave readers breathlessly awaiting the series conclusion.


Last year I read MILA 2.0 and I liked it but didn´t love it, but the ending left me intrigued so that´s why I wanted to read Renegade, because I needed to know it was going to happen with Mila and Hunter and everything that happened before, with the other characters and several questions that remained unanswered, some of which are answered in this book, but not all of them (I guess they had to leave something for the third book).

This book begins where MILA 2.0 was left, Mila and Hunter are together, he´s there to help her but he doesn´t really know anything about her, that she´s an android and there are two groups that are pursuing her because they want to grab her technology, meanwhile Mila is always aware of their surroundings and watching for potential threats.

On the previous book, Mila discovers that she's an android and was program to have feelings, but also for military purposes because she´s a lethal weapon. She didn´t want to be android, she just wants to be a normal girl (which I don´t think is possible), and to be with the boy she likes and the one that makes her feel human. Meanwhile Hunter which was briefly introduced in the previous book, in Renegade we get to know him a little more, because he spends a lot of time with Mila, the girl he likes, whom he barely know.

Overall, I really liked Renegade a bit more than the previous book but the first few chapters I felt that nothing was happening (is primarily a road trip, looking for a contact Mila´s mother told her to find), but it has suspense, is action-packed (I would have liked more action scenes) and romance (I liked the romance and the tension between them), Mila discovering her android functions and her internal struggle between wanting to be human, but also learning to live with it. And finally I got to know more about the Vita Obscura and other questions are also answered. And with its cliffhanger ending, it hooked me to read the next book.
Posted by Adriana C at 11:00 AM