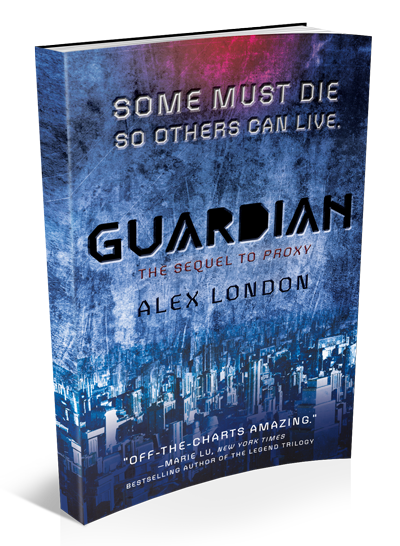 The pulse-pounding sequel to Proxy! Inspired by The Whipping Boy and Feed, this adrenaline-fueled thriller will appeal to fans of The Hunger Games and Divergent.


In the new world led by the Rebooters, former Proxy Syd is the figurehead of the Revolution, beloved by some and hated by others. Liam, a seventeen-year-old Rebooter, is Syd’s bodyguard and must protect him with his life. But armed Machinists aren’t the only danger.


People are falling ill—their veins show through their skin, they find it hard to speak, and sores erupt all over their bodies. Guardians, the violent enforcers of the old system, are hit first, and the government does nothing to help. The old elites fall next, and in the face of an indifferent government, Syd decides it’s up to him to find a cure . . . and what he discovers leaves him stunned.


This heart-stopping thriller is packed with action, adventure, and heroics. Guardian will leave you breathless until the final page.


A fast-paced, thrill-ride of novel full of non-stop action, heart-hammering suspense and true friendship—just as moving as it is exhilarating. Fans of Anthony Horowitz's Alex Rider series, James Dashner's Maze Runner, Patrick Ness's Chaos Walking series, and Marie Lu's Legend trilogy will be swept away by this story.

After Proxy´s ending, I needed to read its sequel immediately. And I really enjoyed Guardian.

The story begins six months later after Proxy and Syd is now known as Yovel and is the face of the revolution, his savior, a key part of the Reconciliation (formerly known as Rebooters) and while he is adored by many, he´s also hated by the Machinists, they want him dead (They were the rich people of Mountain City and await the return of technology), and for this last thing Syd needs a bodyguard all the time, which is Liam a young revolutionary that´s feared by many and he puts Syd's life before anyone and he doen´t doubt to kill anyone to protect him.

In the first part of the book we see Syd, with some responsibilities as their savior but he isn´t very happy about it since he was not their savior, nor the one that brought down the network and he never wanted to be part of it, so he isn´t doing rallies or performing in front  of an audience, he spends his time withdrawn and not wanting to interact with others, because he keeps remembering the last words of one of his friends and has guilt for those who died because of him. And we also see Marie, Syd´s only friend, she´s a purifier that is not other that their enforcer, that make sure that everyone follows their new rules by any means necessary. And while Syd doesn´t agree with the new regime, Marie is a faithful follower ..... until something happens that makes her change her mind.

The plot focus heavily in the new regime and that change is not always good, and many of the ideals of the revolutionaries are not accepted by others; so after we see the revolution there are still the oppressors and the oppressed, but now the tables are turned, this time the one time poor people are the one in power and the one that used to be rich are sent to labor camps or executed.

But the main part of the plot is that the Guardians begin to develop a disease but nobody cares because they´re the only affected by it, but the disease is spreading and as those that used to be in power are next, but still nobody care or do anything about it, that´s why Syd decides to investigate and tries to learn what´s really happening and when he learns the truth .... he starts another cross-country chase to try to prevent the further spread, while others try to stop him.

Overall, I really enjoyed Guardian, it´s an even darker and more violent story than its predecessor, the plot is fast-paced, action-packed and I read it really fast, I loved the beginning of a romance and my favorite character this time was Liam. The ending was very abrupt for my taste so I hope there will be a sequel!
I highly recommended it for fans of dystopian novels and those who like diversity in the characters.

“Every revolution believes it can return something that has been lost, but nothing is ever the same. The only thing that endures are people.”

"Being alive and living aren't the same.”

EXCERPT
Chapter One – GUARDIAN by Alex London
At night, they disposed of the bodies. There was no ceremony, no ritual, no remembrance.
“They’re human,” some argued.
“They were human,” said others. “Now they’re meat.”
“We have to study the infection,” said the doctor.
“We have to contain it,” said the counselor and gave her orders. “Burn the bodies.”
A work detail was tasked with the burning. One by one, in the dead of night, green uniforms with white masks hauled corpses to the pile. The corpses were webbed with black veins, their entire network of blood vessels visible through the pale skin. Dried blood obscured their faces and each had a single hole in the temple by the eyes, where the killing bolt went in. They were put down like livestock, burned like sacrifices.
As the bodies crackled, the doctor watched the flames, her face half in shadow, half dancing in firelight. “I believe there is a cure for this,” she said.
The counselor, standing beside her, nodded, but did not turn to look her way. “Your cure is worse than the disease.”
“You believe that?”
“It’s the truth. Your way is treason.”
“You’re in denial,” the doctor said. “This is going to get worse if we don’t stop it.”
“It’s a new world, Doctor,” the counselor replied. “We can’t turn back the clock.”
“Even to save people’s lives?”
“These”—the counselor gestured at the bodies—“are not people.”
“If it spreads?”
“Is it spreading?”
The doctor watched the young members of the work detail tossing the bodies on the pyre. They moved with the assurance of youth, the kind of attitude that allowed them to stare infection and death in the face and believe it would never touch them. “I don’t know.”
“It is your job to know.”
“I can hardly understand it. The blood turns against the body. Itching, burning. Then, expulsion. Half of them bleed out.”
“And the other half?”
The doctor clenched her jaw. “They haven’t bled out yet.”
“They are in pain?”
“They can’t communicate, but we have to restrain them to keep them from scratching their skin off with their fingernails.” The doctor sighed. “So, yes, they are in pain.”
“Put them out of their misery,” the counselor ordered.
“But, we can still learn—”
“Those are the orders.” The counselor walked away, two green uniforms trailing her into the jungle. The doctor took off her white smock, pulled the blue gloves from her hands with a loud synthetic snap, and stood before the flames. She watched her latest failed experiments turn to smoke and ash in the bonfire, every bit of blood boiled away, with all the information it might have contained.
She had ideas, dangerous to share; but if she didn’t find a way, she feared, this sickness would go further than any of them could imagine. She would record a message in case she failed. She hoped that someone would still be alive to receive it.

You can read the short story PUNISHMENT, the PROXY prequel on Wattpad for free right now! Meet Syd, Knox, and Liam (from Guardian) at ... http://w.tt/1mtouLm 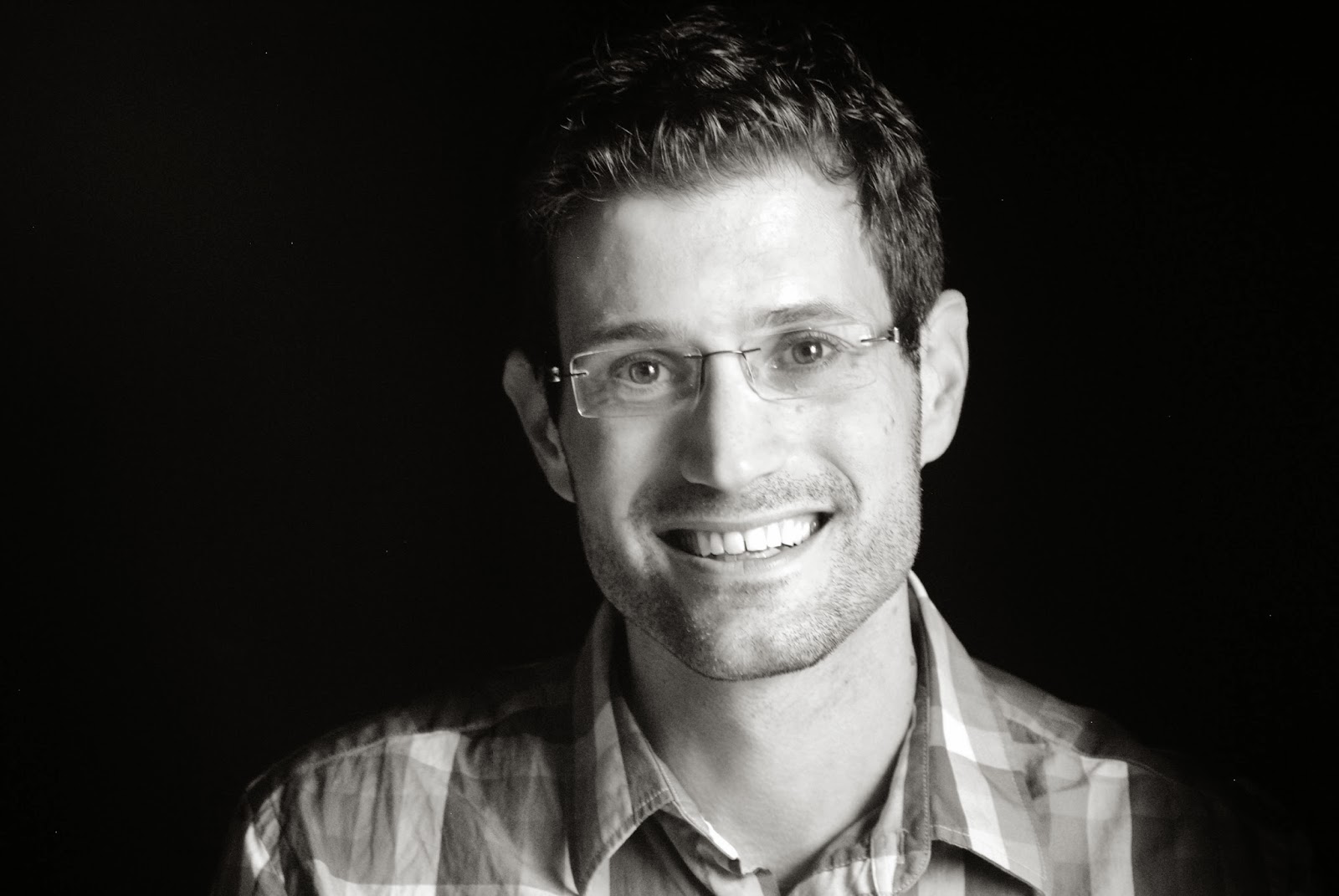 C. Alexander London grew up in Baltimore, Maryland. He's an author of nonfiction for grown-ups (under a slightly different not very secret name), books for teens (as Alex London...see above), and, younger readers. He once won a 12-gauge skeet-shooting tournament because no one else had signed up in his age group. He's a Master SCUBA diver who hasn't been diving in way too long, and, most excitingly, a fully licensed librarian. He used to know the Dewey Decimal System from memory.

While traveling as a journalist, he watched television in 23 countries (Burmese soap operas were the most confusing; Cuban news reports were the most dull), survived an erupting volcano in the Democratic Republic of Congo, a hurricane on small island in the Caribbean, 4 civil wars (one of them was over by the time he got there, thankfully), and a mysterious bite on his little toe in the jungles of Thailand. The bite got infected and swollen and gross and gave him a deep mistrust of lizards, even though it probably wasn't a lizard that bit him.

Although he has had many adventures, he really does prefer curling up on the couch and watching some good television or reading a book. He enjoys danger and intrigue far more when it's happening to somebody else.

He lives in Brooklyn, NY.