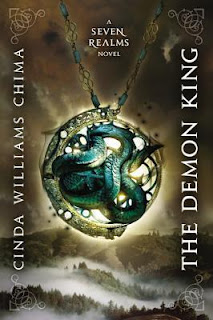 
Times are hard in the mountain city of Fellsmarch. Reformed thief Han Alister will do almost anything to eke out a living for his family. The only thing of value he has is something he can't sell—the thick silver cuffs he's worn since birth. They're clearly magicked—as he grows, they grow, and he's never been able to get them off.

One day, Han and his clan friend, Dancer, confront three young wizards setting fire to the sacred mountain of Hanalea. Han takes an amulet from Micah Bayar, son of the High Wizard, to keep him from using it against them. Soon Han learns that the amulet has an evil history—it once belonged to the Demon King, the wizard who nearly destroyed the world a millennium ago. With a magical piece that powerful at stake, Han knows that the Bayars will stop at nothing to get it back.

Meanwhile, Raisa ana'Marianna, princess heir of the Fells, has her own battles to fight. She's just returned to court after three years of freedom in the mountains—riding, hunting, and working the famous clan markets. Raisa wants to be more than an ornament in a glittering cage. She aspires to be like Hanalea—the legendary warrior queen who killed the Demon King and saved the world. But her mother has other plans for her...

The Seven Realms tremble when the lives of Hans and Raisa collide, fanning the flames of the smoldering war between clans and wizards.


I finally read The Demon King! For years I´ve heard about this series and the first time I saw it ¿was on an In My Mailbox where they talked wonders of it, I do not remember if they were talking about The Gray Wolf Throne (third book in the series) or The Exiled Queen (second book in the series), but I remember that it caught my attention and I added in my wishlist, and soon after I began to see it in booktube and other blogs which also said that it was an amazing book series, so I decided to buy them...... and I own the four books that make up the series, but as always there are more books to read, and I left them on my bookshelf for years, but this 2016, Flamecaster is going to be published, the first of the Shattered Realms series consisting of four books, that take place 20 years after the events in the Seven Realms series, so I need to catch up on my reading.

Han Alister is a 16 years old boy, he used to lead a gang of thieves, but at the beginning of the story he had already retired from that life and is trying to make a living in another way for the sake of his younger sister and mother, so he sells medicinal herbs and transports liquor for other, in order to get money for his family. In the streets he´s known as cuffs - for the silver bracelets he wears on his wrists that had been there since forever and although he had tried, he had never been able to remove them - in the clan of his best friend he´s called Hunts Alone and the rest of the people know him as Han Alister.

The problems of Han Alister begin when he takes a magic amulet from Micah Bayar, the son of the High Wizard and the queen´s adviser and since this amulet is a powerful and forbidden Micah wants it back, because it belonged to the Demon King, a dark wizard who tried centuries destroy the world.

The story is told from two points of view, Han Alister and the Crown Princess Raisa ana'Marianna who recently returned home after spending a few years training in her father's clan, but now she must return to her responsibilities as a crown princess and apparently that include to find a good alliance through marriage and so one day she can lead her queendom. But Raisa's dreams are bigger, as it aims to be a great queen as it was Hanalea, the warrior queen who fought and defeated the Demon King, and Raisa wants to somehow achieve something great and not just be a pawn of her family.

The Demon King is an introductory story to the Seven Realms series and the main characters Han Alister and Raisa ana'Marianna and what I liked more that we get to know them  in their own environment, with their families and friends, there is no romance (among them at least, as normally is expected in YA fantasy novels). The lives of the main characters do come across in this story, but everyone has their own separate plot (which I liked). I really really enjoyed it! the book is very well written and the story flows swiftly, so no boring moments and is quickly read. I can not wait to read its sequel.