Review: I See You by Clare Mackintosh 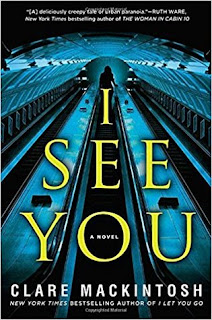 
Every morning and evening, Zoe Walker takes the same route to the train station, waits at a certain place on the platform, finds her favorite spot in the car, never suspecting that someone is watching her...

It all starts with a classified ad. During her commute home one night, while glancing through her local paper, Zoe sees her own face staring back at her; a grainy photo along with a phone number and a listing for a website called FindTheOne.com.

Other women begin appearing in the same ad, a different one every day, and Zoe realizes they’ve become the victims of increasingly violent crimes—including murder. With the help of a determined cop, she uncovers the ad’s twisted purpose...A discovery that turns her paranoia into full-blown panic. Zoe is sure that someone close to her has set her up as the next target.

And now that man on the train—the one smiling at Zoe from across the car—could be more than just a friendly stranger. He could be someone who has deliberately chosen her and is ready to make his next move…

I See You is a thriller that grabbed me from the beginning and didn't let go, the story was very engaging, it´s set in London and has the underground metro as an important part of the plot.

Zoe Walker is a 40-year-old working woman and mother of two young adults, she has the same itinerary from Monday to Friday, takes the metro to her work at the same time every weekday, tries to sit in the same car and walks along the same route and everything is normal until one day reading a local newspaper in the dating section she comes across a photo that looks a lot like her, and she could almost swear she´s the one on the picture, but she finds it illogical because she isn´t in any dating site and the ad only comes with a photo, a phone number and the website findtheone.com.

For her part Kelly Swift is a police officer whom years ago made a mistake at work, by which she continues to pay and which has relegated her to a work in which she isn´t happy and hopes that one day to be able to move up the ranks. From what we see of her, she´s a good police element, is good at researching, solve puzzles and feels empathy for the victims and at her current assignment she monitors the underground metro.

The lives of Zoe and Kelly intersect when the first, obsessed with the findtheone.com ads in which every day a photo of a different woman comes out and discovers that certain of the women have been victims of a crime ranging from robbery to murder.

The story is told from the point of view of Zoe and Kelly with chapters alternating between them and almost every 2 or 3 chapters we have the perspective or the thoughts of a stalker.


We are all creatures of habit.
Even you.
You reach for the same coat each day; leave home at the same time every morning. You have a favorite seat on the bus or the train; you know precisely which escalator moves the fastest, which ticket barrier to use, which kiosk has the shortest queue.
You know these things; and I know them, too.

I See You is a suspenseful and exciting thriller, with situations that have you doubting all the characters that surround them, the last chapters had me desperate to know that it was going to happen, it´s quite intense and has an unexpected twist that left me with my mouth open. If you´re interested in reading a good thriller I recommend that you read this book. It´s really good.
Posted by Adriana C at 9:00 AM