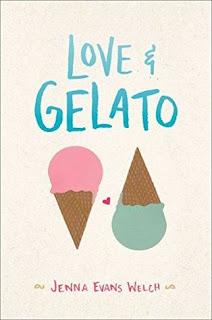 
“I made the wrong choice.”

Lina is spending the summer in Tuscany, but she isn’t in the mood for Italy’s famous sunshine and fairy-tale landscape. She’s only there because it was her mother’s dying wish that she get to know her father. But what kind of father isn’t around for sixteen years? All Lina wants to do is get back home.

But then she is given a journal that her mom had kept when she lived in Italy. Suddenly Lina’s uncovering a magical world of secret romances, art, and hidden bakeries. A world that inspires Lina, along with the ever-so-charming Ren, to follow in her mother’s footsteps and unearth a secret that has been kept for far too long. It’s a secret that will change everything she knew about her mother, her father—and even herself.

People come to Italy for love and gelato, someone tells her, but sometimes they discover much more.

Love & Gelato is a contemporary novel that takes place in Tuscany, Italy and features a young girl whom is going to spend her summer vacation with all the intention of hating everything, as she´s forced by a promise she made to her mother, but ends up falling in love with Tuscany and the people she meets there.

Lina recently lost her mother and before she died, she asked her to go to Tuscany and meet Howard, whom was her best friend at the time she lived in Tuscany and that him will take care of her. When Lina meets Howard, who happens to be her father, she decides to meet him, to spend her vacation there, but once the summer ends, she hopes to return to her old life in the United States. But not everything is as she expected since once there she receives her mother's diary of her time there as a student and little by little with the help of Ren (a young Italian she meets near her home), she decides to visit all the places that her mother writes about in her diary and maybe that way she´ll know a little more about her and Howard and she will see her father through her mother´s eyes.

I love these types of books where you follow clues or in this case a diary where you are slowly discovering the story or some other element along with the characters, in this case Lina visits the places that her mother mentioned in her diary and we get to see Tuscany along with her, in addition to also know a little more about her mother´s life before she had her and we go along with her as she visit parts of the city with her new friend and love interest.

I really enjoyed it and it´s one of those books that leave you with a very good feeling and looking forward to visiting Italy. I do recommend it, if you enjoy cute contemporary novels. I´m looking forward to reading more of her books.
Posted by Adriana C at 7:00 AM