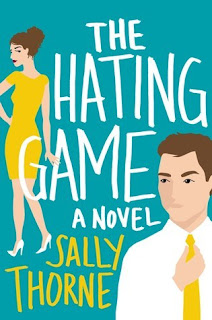 
Nemesis (n.)
1) An opponent or rival whom a person cannot best or overcome;
2) A person’s undoing;
3) Joshua Templeman.

Lucy Hutton and Joshua Templeman hate each other. Not dislike. Not begrudgingly tolerate. Hate. And they have no problem displaying their feelings through a series of ritualistic passive aggressive maneuvers as they sit across from each other, executive assistants to co-CEOs of a publishing company. Lucy can’t understand Joshua’s joyless, uptight, meticulous approach to his job. Joshua is clearly baffled by Lucy’s overly bright clothes, quirkiness, and Pollyanna attitude.

Now up for the same promotion, their battle of wills has come to a head and Lucy refuses to back down when their latest game could cost her her dream job…But the tension between Lucy and Joshua has also reached its boiling point, and Lucy is discovering that maybe she doesn’t hate Joshua. And maybe, he doesn’t hate her either. Or maybe this is just another game.


The Hating Game is a contemporary romance novel that focuses on a fun love-hate relationship between two co-workers.

Lucy Hutton is the executive assistant of one of the CEO of a publishing house, she´s good at her work, she´s always smiling, is the type that wants to please others and be good with everyone. She has a good working relationship everyone with the exception of her mortal enemy Joshua Templeman whom is the executive assistant of the other CEO of the publishing house, he´s also good at his job, but he´s cold, hard, rarely laughs (if ever) and only cares about doing his work well, regardless of whether he´s well liked or not. The publishing house where both currently work was merged a few months before and both come from different part of the publishers (they share office space and their desks are facing each other).

From the moment they met Lucy and Joshua hate each other (or at least that's what Lucy says) and start their game of hating each other. Lucy's life is lonely, every workday she goes to work, hate Joshua and then goes home, sleeps and the next day is a repeat of the day before until the day that at an office meeting it´s announced that a new position will be opened, for which Lucy is perfect as so is Joshua, so they start a new competition/game between them where the attacks between them change and they start to get to know each other a bit more and the dynamics they have had since they met starts to change and Lucy realizes that Joshua can smile occasionally and she realizes that whether or not Joshua wins, her life will not be the same once the winner is announced.

Overall, The Hating Game is a very funny chick-lit novel that had me laughing out loud more than once, I read it in two days (which is fast for me), it has a good romance, likeable characters (I did like Joshua), lots of sexual tension and great banter between them. This is the kind of  story that you end up with a big smile once you finish reading it. I really loved this book! and I recommend it to everyone that likes romance novels.
Posted by Adriana C at 8:00 AM