Review: How to Love by Katie Cotugno 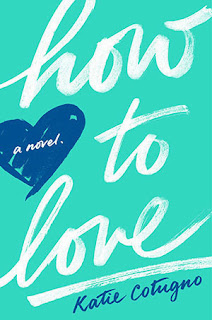 
Before: Reena Montero has loved Sawyer LeGrande for as long as she can remember: as natural as breathing, as endless as time. But he’s never seemed to notice that Reena even exists…until one day, impossibly, he does. Reena and Sawyer fall in messy, complicated love. But then Sawyer disappears from their humid Florida town without a word, leaving a devastated—and pregnant—Reena behind.

After: Almost three years have passed, and there’s a new love in Reena’s life: her daughter, Hannah. Reena’s gotten used to being without Sawyer, and she’s finally getting the hang of this strange, unexpected life. But just as swiftly and suddenly as he disappeared, Sawyer turns up again. Reena doesn’t want anything to do with him, though she’d be lying if she said Sawyer’s being back wasn’t stirring something in her. After everything that’s happened, can Reena really let herself love Sawyer LeGrande again?

In this breathtaking debut, Katie Cotugno weaves together the story of one couple falling in love—twice.


How to Love is a realistic, poignant and beautifully written contemporary novel, but if you are expecting a sweet and fun romance you will not find in the story of Renna and Sawyer, because their love story is complicated, messy and stormy.

The story is told from the point of view of Reena, it has a " before and after". In the before: Renna is 15 years old and has been in love with Sawyer all her life, but he doesn´t know that she exist (romantically speaking because they work together), besides this, Rennas´s  best friend is also in love with him, so when he finally starts dating one of them, the friendship between the girls deteriorates. Sawyer is two years older than Renna, he´s a Don Juan and all the girls at school are pining for him, he likes to party and drinks a lot. And meanwhile Renna is very dedicated to school, in fact if she studies really hard she may graduate a year earlier and she could go to the college of her choice; since her dream is to be a travel writer and travel around the world.

So after all the teenage angst, Renna and Sawyer begin dating  but their romantic relationship is full of angst, is messy and complicated...ending with Renna being pregnant at 16 years old and Sawyer disappearing from her life without a word and without leaving any way to contact him.

In the after: Renna is a mother of a fourteen-month baby girl, she´s taking some classes at the community college, works as a waitress in her parents´s restaurant and is dating a new guy and her life is more or less normal, that´s until Sawyer returns to the city after nearly three years of absence and returns to shake the Renna´s life.

What bothered me a lot when I was reading this story, was mainly in the "after", because Renna allows the mere fact that Sawyer is in town the break her, she changes with him around and she lets him to change her life again, but as the story progress, I realized that it was not all because of Sawyer fault (I would have liked to read his point of view), but also Renna´s because there were so many things happening between them at the end of their relationship that were both their fault. The insecurities, the not being able to speak the truth for fear of being hated, to always be comparing yourself to someone else, to some extent put the expiration date to the relationship is what separates Renna and Sawyer the first time.

How to Love is a poignant, intense, powerful and heartbreaking novel, with a romance full of trouble and angst, but it´s also about second chances in love and life. I really liked it a lot and it plays a very important topic that is teenage pregnancy and I really suffered with Renna when she learns that she is pregnant and realises that all her plans for her future suddenly vanish and also having to talk to their parents . I recommend this book to fans of realistic, intense, poignant, and heartbreaking contemporary novels.