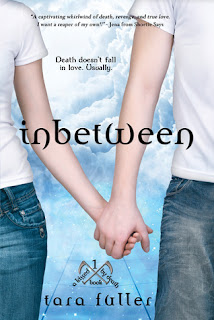 Since the car crash that took her father’s life three years ago, Emma’s life has been a freaky — and unending — lesson in caution. Surviving “accidents” has taken priority over being a normal seventeen-year-old, so Emma spends her days taking pictures of life instead of living it. Falling in love with a boy was never part of the plan. Falling for a reaper who makes her chest ache and her head spin? Not an option.
It’s not easy being dead, especially for a reaper in love with a girl fate has put on his list not once, but twice. Finn’s fellow reapers give him hell about spending time with Emma, but Finn couldn’t let her die before, and he’s not about to let her die now. He will protect the girl he loves from the evil he accidentally unleashed, even if it means sacrificing the only thing he has left…his soul.


Finn has been in love with Allison's soul for the last 25 years and he suffers from not knowing if she´s okay, whether the decision he made was correct. Finn is not an ordinary boy, he's the reaper of the Inbetween and his job is to gather souls who have not earned heaven or hell and deliver them to the inbetween. One day he receives a "calling" to collect a soul in a car accident and there he reconnects with Allison now in the body of Emma, ​​she survives the accident but her father dies. And from that moment Emma is prone to freak accidents that endanger her live due to this evil soul determined to get back at Finn and kill the person he loves - Emma (Allison).

Inbetween had alternating points of view between Finn and Emma so we can see the development of the romance and get to know both characters. Finn is a reaper who had been in love with Emma (Allison) for over 25 years and will do anything for her, even endanger his own soul, as it prohibited to be seen by a living person, much less fall in love with one. Finn´s best friends are Easton the reaper from hell and Anaya the reaper from heaven. I really liked Finn's friendship with them, since they are his best friends and he trust them fully.

Emma is 17 year-old girl that for the past two years has been prone to freak accidents that endanger her life and she´s still alive only because Finn had been something like her guardian and been able to keep away Maeve the evil soul (she´s a little bit crazy) who is determined to kill Emma, ​​in order to get back at Finn. My favorite character in the book is CASH!, Emma´s best friend/neighbor, he´s a super-hot bad boy/artist/womanizer, he loves Emma like a brother and he cares about her.

I really liked Inbetween, the first book in the Kissed by Death series, this book is a paranormal romance that touches the subject of reincarnation, but what caught my attention when I read the synopsis of this book was that it was about grim reapers. My only complaint is that I would have liked to see more of the romance between Finn and Allison of their time in the "inbetween" before her reincarnation as Emma.

I definitely want to read the next book in the series.