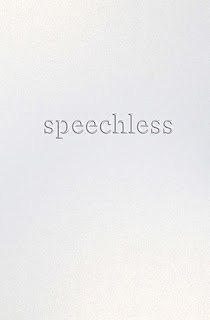 
Everyone knows that Chelsea Knot can't keep a secret.
Until now. Because the last secret she shared turned her into a social outcast--and nearly got someone killed.
Now Chelsea's has taken a vow of silence--to learn to keep her mouth shut, and to stop hurting everyone else. And if she thinks keeping secrets if hard, not speaking up when she's ignored, ridiculed and even attacked is worse.
But there's strength in silence, and in new friends who are, shockingly, coming her way. People she never noticed before. A boy she might even fall for. If only her new friends can forgive what she's done. If only she can forgive herself.

Chelsea Knot is the queen of gossip, and she´s proud of it, She loves to discover the secrets of people and if she can use it against them, she will. She´s best friend with one of the most popular girls in school, so she has a good social status, she´s envied by many and hang only with the populars and she goes to all the best parties. In the New Year's party at the home of her best friend Kristen she discovers the secret of Noah and decides to tell her friend,s thinking that everyone will laugh and that´s going to be all that happens, but everything gets out of control and Noah ends up in the hospital. And in trying to remedy her mistake Chelsea ends up being hated by the whole school, including her best friend Kristen and the rest of her group of friends.

And because of the serious consequences of her gossip she decides to take a vow of silence, and do something good and remain silent. Which is not well accepted by anyone, nor her parents, nor her former friends, and  nor her teachers, but she decides to stay strong and continue her vow of silence. She also is bullied by her former friends, but in all there is a ray of hope in the place she least expected, a girl named Asha, which Chelsea had never noticed before, decides to give Chelsea a chance and be her friend, and there is also Asha´s friend Sam, who initially is reluctant (and rightly so) to accept Chelsea, but he ends up accepting  her and becomes friend with her and also her romantic interest.

When I started reading this book I thought I was not going to like Chelsea, because she´s too gossipy, mistreats people and she feels superior to the unpopular. Once she becomes an outcast, at first she feels sorry for herself more than for those involved, but as the story progresses she begins to change and really realize what she was doing wrong and spends much time thinking and reflecting about her mistakes, so I ended up like her. Chelsea is also very strong, and that despite being harassed and verbally abused by her ex-friends, she doesn´t spend her time crying, but she tries to confront them and handle the situation very well.

Speechless is seen from the point of view of Chelsea so that you'd think there is not much dialogue because of her vow of silence and everything would happen in her head, but she communicates via written messages on paper or on a small white board, which she carries most of the time.

Quote from the book: written conversion between Chelsea and Sam


I loved the secondary characters!, Asha is an amazing friend, always with a smile from ear to ear and she´s the one that approached her and gave her a chance to meet each other and the rest of the gang Sam and Andy. Sam is a nice person, and as Chelsea once thought he´s not perfect, but perfection is overrated. And Andy can´t accept Chelsea as part of the gang (he had a good reason), but I liked his character and there is a scene or two with him that are just perfect and are my favorite moments of the book.

What else I can say about Speechless, this book has a sweet romance, is poignant, heartbreaking and I LOVED IT!, Is a very good book with many great messages about friendship, acceptance of yourself and others and to think before speaking. I highly recommend this book if you like contemporary books to be poignant and heartbreaking.