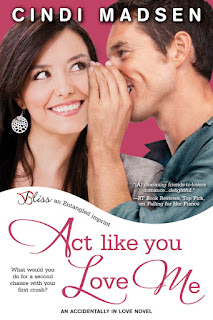 
What would you do for a second chance with your first crush?


I love romantic comedies and chick-lit and I felt that this books was within this genre, I really like it a lot and I had fun reading the mess in which Brynn got herself in, because what starts at the beginning as a misunderstanding between Brynn and Sawyer then she takes the opportunity to create another identity and act like a different person as she is regularly with the help of the good or bad advice of her brother.

Brynn is an attractive woman, she is a theatre actress and she loves romance (movies, books, plays, etc.), but usually she doesn´t have good luck with men because she starts quoting lines from plays in a regular talk. And she was not always attractive because in high school she took really bad decisions regarding her appearance, so in her high school years she was a insecure girl who loved the theater. She used to have a crush with one of the most popular boys at school, but he never notice her so when six years later Sawyer returns to the city, to remodel a house that he wants to sell; and he also ends up been the director of the play where the main actresses is Brynn.

Sawyers is attracted to Brynn, but after the romantic disaster he had in New York, he has vowed never to date another actress, and apparently that is not going to difficult to accomplish because Brynn, the actress to whom he is attracted, seems to hate him for no apparent reason.

The story is told from Brynn´s and Sawyer´s POV, and I love dual POVs because they allowed me to get to know and like both characters.

Overall, this is a fun romance novel, very entertaining, very cute romance and with a happy ending. It is highly recommended book for fans of romance/chick-lit novels.


Thanks to Entangled: Bliss for providing the ebook in exchange for an honest review.
Posted by Adriana C at 5:00 PM