In the After by Demitria Lunetta 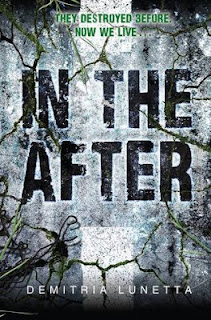 
They hear the most silent of footsteps.
They are faster than anything you've ever seen.
And They won't stop chasing you...until you are dead.

Amy is watching TV when it happens, when the world is attacked by Them. These vile creatures are rapidly devouring mankind. Most of the population is overtaken, but Amy manages to escape—and even rescue “Baby,” a toddler left behind in the chaos. Marooned in Amy’s house, the girls do everything they can to survive—and avoid Them at all costs.

After years of hiding, they are miraculously rescued and taken to New Hope, a colony of survivors living in a former government research compound. While at first the colony seems like a dream with plenty of food, safety, and shelter, New Hope slowly reveals that it is far from ideal. And Amy soon realizes that unless things change, she’ll lose Baby—and much more.

Rebellious, courageous, and tender, this unforgettable duo will have you on the edge of your seat as you tear through the pulse-pounding narrow escapes and horrifying twists of fate in this thrilling debut from author Demitria Lunetta.

I have read several dystopian books and so far all of them have been about a society created many years after the apocalypse; so what attracted me about this book was that the protagonist has to live the apocalypse, the end of the world as she knows it and has survive it, and she lives in a post-apocalyptic world for several years, to later be rescued and go to the dystopian society where everything is perfect in appearance, everyone follows the rules and those who do not suffer the consequences.

In the After is divided into three parts, the first being the apocalypse and post-apocalypse. And the second part and third takes place in New Hope, the dystopian world where everything is perfect and safe. The book is told from Amy´s POV, she´s 17 years old and thanks to the paranoia of her mother and the eco-friendly of her father, she has a safe place to live with Baby a girl of 6 or 7 years old. And through her memories we get to see what happened three years before when They (aka Aliens) invade the earth and kill most of the population.

The second part takes place when Amy and Baby are rescued and taken to New Hope, there the story takes an interesting twist and we can see the dependence/closeness that Amy has to Baby and how they fit into the new world of the after. In this part of the book the narrative annoyed me a bit at the beginning because in the end of the first part and the beginning of the second part is not linear, but the second part begins 4 months later and we only got to see what happened during that time, through memories, but once I got used to this narrative I really liked it but I was desperate to know what had happened with Amy.

I really liked the interaction between Amy and Baby because they have lived together almost since the Aliens arrived and at that time they had 14 years old and 3 or 4 years old respectively, so they are completely dependent on each other and have a very strong bond that unites them.

Overall I really liked this book, the first part of the book is pretty intense and stressful because of the aliens that look like zombies, the second and third part of the story has a bit of action, a nearly romance (because really almost nothing happens) and the plot has a very interesting twist. I recommend this book for fans of  apocalyptic/post-apocalyptic/dystopian books with a little of science fiction.


Thanks to Harper Teen for providing this ARC in exchange for an honest review.