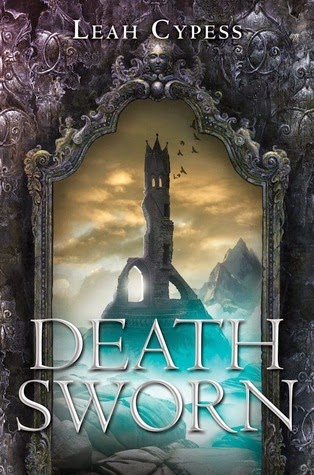 
When Ileni lost her magic, she lost everything: her place in society, her purpose in life, and the man she had expected to spend her life with. So when the Elders sent her to be magic tutor to a secret sect of assassins, she went willingly, even though the last two tutors had died under mysterious circumstances.

But beneath the assassins’ caves, Ileni will discover a new place and a new purpose… and a new and dangerous love. She will struggle to keep her lost magic a secret while teaching it to her deadly students, and to find out what happened to the two tutors who preceded her. But what she discovers will change not only her future, but the future of her people, the assassins… and possibly the entire world.

I have lately read more YA fantasy and I´m really starting to like very much this genre, since previously I didn´t read many fantasy books because my favorite is the dystopian and paranormal genre. And although I definitely didn´t love Death Sworn, I did enjoy reading it.

In Death Sworn, Ileni the main character, is a sorcerer that´s losing her power and the elders of her community sent her to be the tutor of assassins because their community has a truce with the Master of the assassins and this includes that they must provide them a permanent tutor. And the interesting thing about this is that they also sent her to investigate the murder of the two tutors that preceded her.

Ileni is a sorceress, she belongs to a group of sorcerers known as the Renegai and up to 6 months ago she was the best of her generation, with a very promising future, but after discovering that her magic was failing her (and that it will continue to decrease gradually until in a near future she´ll be powerless), her life changes completely because her people no longer look her as someone valuable for the community, so that´s why the elder´s decide sent her to the assassins´s cave in a mission that´ll endangers her life and from which she will never come back. So she arrived with a mindset that she will not live long and that at any moment she could be killed like his predecessors and she´s okay with it.

The book is a fast read and I like that the romance is not insta-love, not even insta-attraction at the beginning and what I loved most is how romantic is Sorin (this is me being sarcastic), because he is cold, he doesn´t show any emotions and he´s the killer assign the protection of Ileni within the cave. Sorin has been trained since childhood to be a assassin and he´s honored to be chosen for a mission, his purpose in life is to obey the orders of his Master, be sent to many missions and die honorable in one of them.

The assassins´s cave is where the whole story takes place, is like a subterranean city inside a mountain, lit by magical stones, and for centuries a place where assassin are trained, the population consists of only men (that is until Ileni comes to live there) of different ages, which are divided in groups by age, there they´re trained by teachers in various "arts" necessary to make them deadly weapons and all the "students" are there since they were kids, either because they were "donated" to the cause, kidnapped or as in Sorin´s case were parentless children living in the streets. All students follow the orders of their Master of the assassins blindly, they almost see him as a messiah, and they do whatever he orders them to do, because he knows everything and has a plan that everyone should follow to recover the Empire which was taken over by a tyrant centuries ago.

About the world-building, I felt that it needed a little more development, since the whole story takes place inside the caves and there is rarely mentioned the Empire that they´re trying to defeat, all highlighting about the empire is that their sorcerers use dark magic, but otherwise there is not much known about them. But with what happens at the end, I´m looking forward reading the next book.


I received an eARC of this book from the publisher in exchange of an honest review.
Posted by Adriana C at 1:00 PM