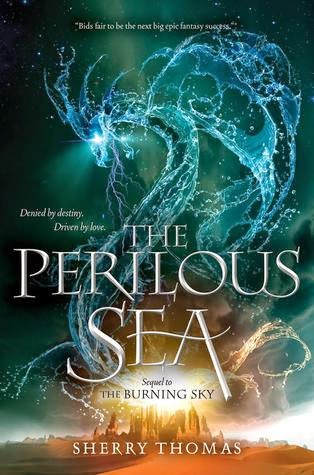 You can read my review of The Burning Sky - here


After spending the summer away from each other, Titus and Iolanthe (still disguised as Archer Fairfax) are eager to return to Eton College to resume their training to fight the Bane. Although no longer bound to Titus by a blood oath, Iolanthe is more committed than ever to fulfilling her destiny—especially with the agents of Atlantis quickly closing in.

Soon after arriving at school, though, Titus makes a shocking discovery, one that makes him question everything he previously believed about their mission. Faced with this devastating realization, Iolanthe is forced to come to terms with her new role, while Titus must choose between following his mother's prophecies—and forging a divergent path to an unknowable future.

This book is perfect!. One of the best I've read this year and definitely this trilogy will be among my favorites of all time. It's a great fantasy story.

The book is divided into two time frames: the present and 7 weeks before; told from Titus and Iolanthe´s POVs. In the present we find a girl and a boy, they wake up in the Sahara Desert, and neither knows their name or any personal information, but they can remember that they´re mages and everything about their world and that they should stay away from Atlantis agents, so the two decide to join forces to keep each other safe, even though at the beginning they´re cautious and aren´t sure about where their alliances are, but over time they begin to trust each other . What I liked a lot of this time is the dynamic between the characters, the unknown and the chemistry between them.

While in the past we see Iolanthe (as Fairfax) and Titus returning to Eton College in London, after being apart all summer, thus restoring their romantic relationship and also following the steps necessary for their mission and training because at some point they will face the Bane. But something gets in their plans, something that could ruin everything that Titus has seen as his destiny all his life and begins to question many of his decisions and steps he had taken so far.

Iolanthe (Fairfax) and Titus are wonderful characters in this sequel and we get to know a little more about Iolanthe, but also got to know more about the boys living in Eton College and the origins of some of them, and how they´ll play a more important role in the plot.

The Perilous Sea is an excellent second book in a trilogy, in it we found some answers to many of the questions from the first book, such as to why the Bane is desperately seeking Iolanthe, also more information about the Bane and other details about Iolanthe.

I really  really loved this book! It´s a perfect combination of romance, friendship, lovable characters, action, magic, suspense, mystery and unexpected twists and turns that had me glued to the book all the time. I highly recommended this book.

Now, I desperately need the third and final book of this amazing trilogy.
Posted by Adriana C at 11:00 AM