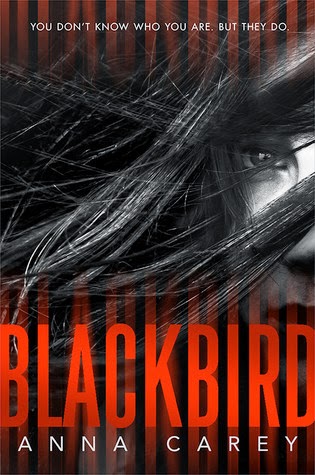 
This twisty, breathless cat-and-mouse thrill ride, told in the second person, follows a girl with amnesia in present-day Los Angeles who is being pursued by mysterious and terrifying assailants.

Blackbird is a book that was waiting to read since I read the synopsis, because I am intrigued by stories dealing with memory loss and the mystery around it trying to out whom she really is.

The story starts when a girl wakes up in the subway tracks and the train car approaching her and she has to make a quick decision and somehow she survives and is rescued, when questioned, she realizes that she has no memory, doesn´t remember anything about herself and when searching through the backpack beside her, she finds some instructions to follow, so without knowing she ends up being chased by both the police and from unknown people trying to kill her ... but she has not the slightest idea of ​​what is going on, she finds help with a boy that she meets that first day, meanwhile  she tries to figure out what's going on with her and who she really is.

Sunny (is the name she adopts) is a girl who knows nothing about her past, but she's smart, knows how to blend, is observant and is slowly discovering new things about her. Her situation reminded me a bit of Jason Bourne (first movie, I haven´t read the books).

The story is told in second person (using "You"), something that annoyed me most of the time and it wasn´t easy to get used to this form of narration,

Blackbird is the first book of this duology, is a story about a girl with amnesia that is wanted by the police and pursued by people who want her dead, so it has enough action, chases, mystery, intrigue, suspense and a rather unexpected turn (I didn´t see it coming), has a good ending that leaves you hooked for the next book. My only "but" is the narrative in second person, but I sort of enjoyed it.
Posted by Adriana C at 1:30 PM