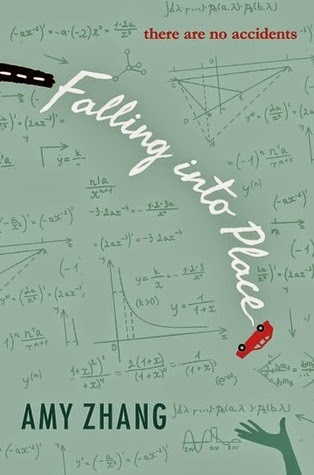 On the day Liz Emerson tries to die, they had reviewed Newton’s laws of motion in physics class. Then, after school, she put them into practice by running her Mercedes off the road.

Why? Why did Liz Emerson decide that the world would be better off without her? Why did she give up? Vividly told by an unexpected and surprising narrator, this heartbreaking and nonlinear novel pieces together the short and devastating life of Meridian High’s most popular junior girl. Mass, acceleration, momentum, force—Liz didn’t understand it in physics, and even as her Mercedes hurtles toward the tree, she doesn’t understand it now. How do we impact one another? How do our actions reverberate? What does it mean to be a friend? To love someone? To be a daughter? Or a mother? Is life truly more than cause and effect? Amy Zhang’s haunting and universal story will appeal to fans of Lauren Oliver, Gayle Forman, and Jay Asher.


Falling into Place is one of my most anticipated books to read this year, because it was advertised for fans of Gayle Forman and I love the If I Stay duology, is one of my favorites and I feel that perhaps my expectations were so high due to this and this story fell short for me, it wasn´t what I was expecting (maybe that has a lot to do with my disappointment with this book).

This time I'm with the minority, but I could not really click with the story, I didn´t like the characters (especially Liz), and it felt disjointed the narrative due of so much jumping back and forth on the timeline (it didn´t work for me this time so much jump in the timeline and different POVs), I feel that that made ​​it difficult to delve into the story of Liz Emerson and even the question of whom was the mysterious narrator didn´t kept my attention on the plot.

Liz is a young woman that decides she no longer wants to live, so she plans her suicide to look like an accident, she lives with her mother that´s always absent, Liz suffers from depression, she has bulimia and alcohol problems, but on her exterior she´s the most popular girl at school, has great friends, the "perfect" boyfriend and life, she´s the typical mean girl, she likes to make fun of the less popular, makes pranks, crushes those that bother her and persuades her friends Kennie and Julia to do what she wants, so it also ends up affecting their lives.

The story jumps between the present and the past from several points of view, which skips between moments of Liz and those around her; and what were the motives led her to commit suicide, taking as its starting point her car "accident".

I hoped it was a very emotional read, but it was not the case (at least for me) and even some touching moments, felt disjointed because I didn´t connect with the story, or with Liz and I could not enjoy it.
Definitely this book was not for me.
Posted by Adriana C at 8:00 AM