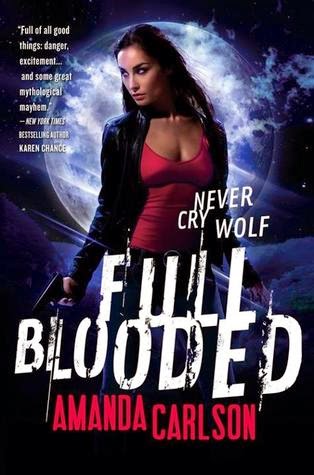 
Born the only female in an all male race, Jessica McClain isn’t just different—she’s feared.

After living under the radar for the last twenty-six years, Jessica is thrust unexpectedly into her first change, a full ten years late. She wakes up and finds she’s in the middle of a storm. Now that she’s become the only female full-blooded werewolf in town, the supernatural world is already clamoring to take a bite out of her and her new Pack must rise up and protect her.

But not everyone is on board. The werewolf Rights of Laws is missing text and the superstitious werewolves think that Jessica means an end to their race. It doesn’t help when Jessica begins to realize she’s more. She can change partway and hold her form, and speak directly to her wolf. But the biggest complication by far is that her alpha father can't control her like he can the rest of his wolves.

Urban fantasy is one of my favorite adult genre and one of my favorite series is Women of Otherworld by Kelley Armstrong, especially her books that have Elena as the main character, the only female werewolf in a all male race, so I could not avoid compare or get deja vus at times about the story of Jessica McClain with the one of Elena Michaels, although their lives and their world is quite different.

Jessica McClain is the daughter of the most powerful Alpha and has a twin brother, with whom since childhood has had a telepathic connection, but she´s a rarity, since werewolves only have male children never daughters, or at least that was until Jessica was born. And because werewolves are a very superstitious race and there is a prophecy that talk about a female werewolf that could end the race of werewolves, and due to this Jessica´s had been feared and hated by her pack all her life, but when she didn´t change at puberty as a common werewolf, she was considered just a human and sort of was left alone (but not by all the werewolves), but now at 26 years old, she had her first change and becomes the first female werewolf and all her life is about to change irrevocably.

Jessica is a great hero, she´s  a strong, smart and tough woman, she wanted to had her own life away from the pack and her overprotective father, which she managed to do while she was human, but when she had her first change as a werewolf, she become part of the pack, so now she must follow the rules and orders of the Alpha (her father).

Full Blooded is a very good first book in a series which introduces the world where Jessica lives, as well as various supernatural races, they also introduce her romantic interest, besides great secondary characters and even though in this first book there isn´t romance, it´s action-packed and has a cliffhanger ending that leaves you wanting to read the next book shortly. I really enjoyed the book immensely!!
Posted by Adriana C at 9:00 AM