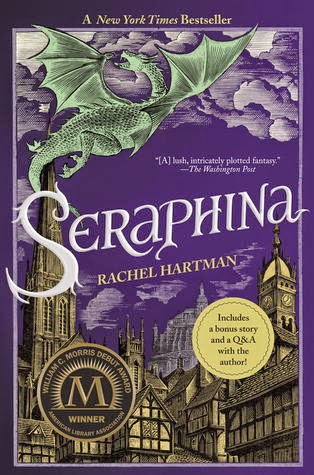 
In the kingdom of Goredd, dragons and humans live and work side by side – while below the surface, tensions and hostility simmer.

The newest member of the royal court, a uniquely gifted musician named Seraphina, holds a deep secret of her own. One that she guards with all of her being.

When a member of the royal family is brutally murdered, Seraphina is drawn into the investigation alongside the dangerously perceptive—and dashing—Prince Lucien. But as the two uncover a sinister plot to destroy the wavering peace of the kingdom, Seraphina’s struggle to protect her secret becomes increasingly difficult… while its discovery could mean her very life.

This is one of those books that once I finished reading it, I keep thinking about it and remembering details I liked. I really loved the way dragons are described and the fact that they can take human form.

After years of dragons attacks into the human cities, for the past 40 years there has been peace between humans and dragons, because the Queen and Ardmagar (the dragon leader) signed a treaty, but now that it approaches its anniversary of the truce, Prince Rufus was killed and is suspected to have been committed by a dragon which would violate the treaty and if that was true it could break it. That´s why the Captain of the Guard must clarify the murder as soon as possible, as this is creating hostility toward the dragons and due to a misunderstanding between Seraphina and Captain of the Guard, she ends up helping him with the investigation.

Seraphina is an insecure and reserved young woman, that recently started working as an assistant to the royal composer Viridus, she lives in the Royal Palace, there she gradually begins to be noticed by the princes, first by Princess Grisselda, to whom she teach music, but is her knowledge of dragons behavior that makes her stand out and then by Prince Lucian Riggs, who is betrothed to the princess, besides of being the Captain of the Guard, so they end up assisting each other in the research related to dragons. I liked the interactions between Prince Lucian and Seraphina.

Seraphina has a secret that could bring her problems if its known, for this reason she has always led a quiet life without friends and without calling attention to itself. She feels a special affection for her teacher the dragon Orma, whom she had known since childhood and thanks to this she has an extensive knowledge of dragons, their behavior and their thinking.

I really liked the way the dragons are represented and in their human form they don´t show feelings, since it´s considered unnecessary, dragons are intelligent, very logical in their thinking and very direct in their speech. So Seraphina interactions with Orma are very entertaining.

The world building is well defined and very vivid. I loved it!. And the author writing is beautiful, it´s easy to imagine the world where Seraphina lives.

Overall, Seraphina is GREAT read, it´s a very entertaining epic fantasy novel, which is beautifully crafted with good and lovable characters, with its dose of action, suspense, mystery and romance. I highly recommend it for fans of epic fantasy books.