Review: The Jewel by Amy Ewing 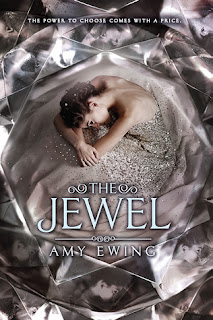 
The Selection meets The Handmaid's Tale in this darkly riveting debut filled with twists and turns, where all that glitters may not be gold.

The Jewel means wealth, the Jewel means beauty—but for Violet, the Jewel means servitude. Born and raised in the Marsh, Violet finds herself living in the Jewel as a servant at the estate of the Duchess of the Lake. Addressed only by her number—#197—Violet is quickly thrown into the royal way of life. But behind its opulent and glittering facade, the Jewel hides its cruel and brutal truth, filled with violence, manipulation, and death.

Violet must accept the ugly realities of her life . . . all while trying to stay alive. But before she can accept her fate, Violet meets a handsome boy who is also under the Duchess's control, and a forbidden love erupts. But their illicit affair has consequences, which will cost them both more than they bargained for. And toeing the line between being calculating and rebellious, Violet must decide what, and who, she is willing to risk for her own freedom.

The Lone City is a city divided by caste or social class and they´re divided in 5 circles surrounded by walls, the poorest are living in the Marshes, then is the Farms, then Smoke, the penultimate circle is Bank and finally in the center is the Jewel, which is where the royalty live.

And all girls who were born in the Marsh or the Farm are subjected to a blood test at puberty and if test is positive they´re sent to a holding facility where they are trained in Auguries (to manipulate color, shape and growth of objects or plants) and when they reach certain age they´re auctioned to the highest bidder as surrogates of Royalty. There their duty is to obey their masters, they are treated as property and are prepared to be the surrogate of  the baby to their masters.

Violet is a 16 years-old girl, that´s is auctioned as lot # 197, and from the moment of her sale she can only be referred to as 197 or the surrogate of the House of the Lake. And despite living in luxury, because she´s dressed and lives in opulence, is well fed and have a lady-in-waiting that serves all her needs, Violet still is a prisoner until she can get pregnant and give birth to a healthy baby to the House of the Lake, then her future is uncertain. So Violet must find a way to escape her fate.

Violet is very naive and she lives in a brutal dystopian world, with a combination of old and new, where royalty has all the power and can dispose of the life of their subjects at any time. There is a clear power play among the royalty that directly affects the security of Violet.

My biggest problem with the story was the romance, because is insta-love and I didn´t believe for a moment.

A character that intrigues me a lot is Lucien, he´s the lady-in-waiting of the Electress, his intentions toward Violet are unclear, is he an ally or someone who just wants to use her for his own purposes.

Overall, it´s a good dystopian book (if you don't take into account the insta-love) with an interesting and unique story (although some elements reminded me Archetype -. I have not read The Selection, nor The Handmaid's Tale, so that I can not comment if they´re similar), it has some interesting and unexpected twists and that ending hooked me to read its sequel - The White Rose. This trilogy definitely has so much potential.