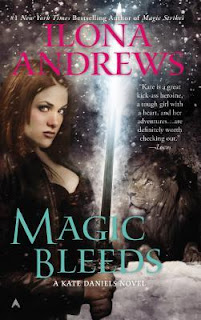 
Atlanta would be a nice place to live, if it weren't for the magic. When the magic is up, rogue mages cast their spells and monsters appear, while guns refuse to fire and cars fail to start. But then technology returns, and the magic recedes as unpredictably as it arose.

Kate Daniels works for the Order of Knights of Merciful Aid, officially as a liaison with the mercenary guild. Unofficially, she cleans up the paranormal problems no one else wants to handle - especially if they involve Atlanta's shapeshifting community. When she's called in to investigate a fight at the Steel Horse, a bar on the border between the territories of the shapeshifters and the necromancers, Kate quickly discovers that there's a new player in town. One who's been around for thousands of years - and who rode to war at the side of Kate's father. This foe may be too much even for Kate and Curran, the Beast Lord, to handle. Because this time Kate will be taking on family.

I know that I sound like a broken record with my comments about this series, but I liked this book more than the previous book. The plot is engaging and so far it is getting better and better.

In the last three books we have slowly learned the origins of Kate Daniels, about whom is her biological father, and how her adoptive father trained her whole life to be the best fighter in addition to not draw attention to herself, to not get attachments of any kind, because this will weaken her, so she must not have empathy for others, because one day she will face her biological father and for this she needs to be alone without any friends or love interest that could drag her down. But the teachings of her foster father failed because Kate she feels empathy for others, actually for the first time in her life she´s having close friends, has an adopted niece and is open to the possibility of having a romantic partner.

In the last two books Kate and Curran have flirted in a very peculiar manner and on this book we see progress in the romance department. I liked them as a couple, because both are stubborn, obstinate, not very good to compromise on anything, but they gradually begin to make concessions for each other.

The threat this time is someone biologically close to Kate, someone very powerful whom will cause chaos to Atlanta, which is their specialty because it comes from someone who has been around for thousands of years and ended with several ancient civilizations, and Kate must try that her heritage is not discovered.

I loved this book because there is finally romance! It was time that Curran and Kate stop skirting around and accept their attraction, but nothing is easy between this two in battle or romance, they just don´t have peace with all the threats, especially because this threat affects them both. Magic Bleeds is an easy read, fast-paced and action-packed. I highly recommend this series, it´s amazing!.
Posted by Adriana C at 8:00 AM