Review: One by Sarah Crossan 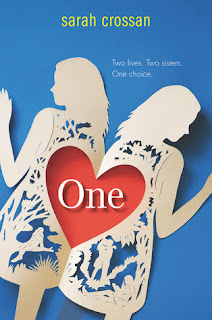 
Tippi and Grace share everything—clothes, friends . . . even their body. Writing in free verse, Sarah Crossan tells the sensitive and moving story of conjoined twin sisters, which will find fans in readers of Gayle Forman, Jodi Picoult, and Jandy Nelson.

Tippi and Grace. Grace and Tippi. For them, it’s normal to step into the same skirt. To hook their arms around each other for balance. To fall asleep listening to the other breathing. To share. And to keep some things private. The two sixteen-year-old girls have two heads, two hearts, and each has two arms, but at the belly, they join. And they are happy, never wanting to risk the dangerous separation surgery.

But the girls’ body is beginning to fight against them. And soon they will have to face the impossible choice they have avoided for their entire lives.


One is a novel written in free verse, emotionally charged, sad and touching about two conjoined twin sisters. This is the first novel I've read that is written in verse, so that part was new for me and I really really enjoyed it tremendously.

Tippi and Grace are two 16 year old girls that all their lives have been home schooled, attended regularly to the doctor for check ups about their health, and visit often the psychologist, all of these have affected the economy of her family and for the first time in their life they´re going to public school, where they will make friends but also be mocked and misunderstood by their peers. Besides that one of the girls begins to have romantic feelings for one of her classmates, something she never saw as a possibility, due to the isolation in which they grew up, aside from their family, doctors and people they crossed paths on the street, they had no friends of their own age.

An also for the first time Tippi and Grace are forced to really contemplate the idea of ​​separation surgery because if they didn´t undertake such surgery it would have a great impact on their health.

The story is told in verse, from the viewpoint of Grace, which is the most friendly twin, which accepts the decisions of their parents and sister, without causing problems and is carried away by his Tippi, the twin with more character dominant.

One is beautifully written, it's a sad, touching, poignant, bittersweet novel, is one of those books that once you finish reading it you can not get it out of your head by the roller coaster of emotions that provoke on you. I highly recommended this contemporary novel.
Posted by Adriana C at 9:00 AM