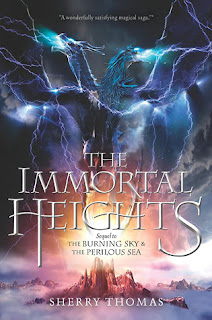 
In a pursuit that has spanned continents, Iolanthe, Titus, and their friends have always managed to remain one step ahead of the forces of Atlantis. But now the Bane, the monstrous tyrant who bestrides the entire mage world, has issued his ultimatum: Titus must hand over Iolanthe, or watch as his entire realm is destroyed in a deadly rampage. Running out of time and options, Iolanthe and Titus must act decisively to deliver a final blow to the Bane, ending his reign of terror for good.

However, getting to the Bane means accomplishing the impossible—finding a way to infiltrate his crypt in the deepest recesses of the most ferociously guarded fortress in Atlantis. And everything is only made more difficult when new prophecies come to light, foretelling a doomed effort....

Iolanthe and Titus will put their love and their lives on the line. But will it be enough?

With The Immortal Heights, Sherry Thomas brings the acclaimed Elemental Trilogy to its breathtaking conclusion.

Great conclusion of this amazing fantasy trilogy, full of magic and good action sequences ....... I loved it!!!

The Immortal Heights starts exactly where it left off the previous book, we see Iolanthe and Prince Titus facing the army mages of Atlantis and as both are willing to do anything to prevent Iolanthe from being captured by them, because if she was captured she will be used to make the Bane (he´s the ruler of Atlantis) more powerful.

Iolanthe or Fairfax as Titus regularly refers to her, is the most powerful elemental mage of her generation and Titus has prepared all his life to be instrumental in the final battle against the Bane, this because his mother was a seer and left him a diary where she wrote her visions, which he keeps as a guide of what to do, even though he knows that there is a vision where his mother saw that he will not survive this battle. And in this last battle accompanies them Kashkari, a mage who also has prophetic dreams and during the trip he has several dreams that concern Fairfax and Titus that do not paint a good future for either of them.

Iolanthe and Titus are really good characters because during the duration of the trilogy I got attached to them, I care about them and I'm invested in their welfare. I liked that their romance is very stable and there is no dramas and both are very much in love with each other ... there is balance between them.

The Elemental Trilogy has original features with a well-defined world and a really beautiful romance, the last chapters had me on the edge of my seat as we get to see the fulfillment of the vision/prophecies that have been mentioned during the trilogy, the ending of this book is amazing and I loved the epilogue. I highly recommend this extraordinary trilogy.
Posted by Adriana C at 8:00 AM