Review: The Rest of Us Just Live Here by Patrick Ness 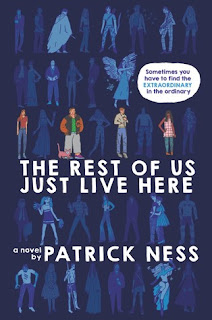 
What if you aren’t the Chosen One?

The one who’s supposed to fight the zombies, or the soul-eating ghosts, or whatever the heck this new thing is, with the blue lights and the death?

What if you’re like Mikey? Who just wants to graduate and go to prom and maybe finally work up the courage to ask Henna out before someone goes and blows up the high school. Again.

Because sometimes there are problems bigger than this week’s end of the world, and sometimes you just have to find the extraordinary in your ordinary life.

Even if your best friend is worshiped by mountain lions.

Award-winning writer Patrick Ness’s bold and irreverent novel powerfully reminds us that there are many different types of remarkable.

I was a fan of the TV show - Buffy the Vampire Slayer and it seems that Patrick Ness also liked it because there are several references that reminded me of the TV series, but with this story the author wanted to focus on those who are not the "chosen one", they aren´t even friends of the "chosen one", so that the main character of this story are those who regularly on a supernatural/paranormal stories, are the extras, the background. This story reads almost like a contemporary novel, because it has some supernatural elements, but it´s not the main of the plot.

The story is told almost entirely from the point of view of Mikey, a sort of normal guy, without any special power, he has problems of anxiety and OCD, he has a politician mother, an alcoholic father, an anorexic older sister - Mel - and Meredith his overachiever little sister, but they must appear to be the perfect family. Besides this he has a crush with his friend Henna since forever and seems to he finally have the opportunity to confess his feelings ... if he gets the courage and decides to say something before graduation.

Mikey group of friends consist of Mel (Mikey´s sister), Jason is his best friend, whom is gay and is a grandson of the goddess of cats and Henna for whom he has romantic feelings. And these gang is just waiting for the near future, to just finish school and go to prom.

At the beginning of each chapter there is a paragraph that describes generally the paranormal part of the plot, as the Immortals come to the human world with the intention to seize it and how the "indie" kids from any high school are always the chosen ones to fight these evils.

But the battle between the Immortals and the indie kids is in the background and the main characters refer to these guys  as the ones that always are fighting the zombies, vampires, ghosts, etc. and Mikey and gang can only hope that this time they do not destroy the school before graduation as they have at other times (this part was really funny).

Overall, The Rest of Us Just Live Here is a contemporary novel with satirical elements, besides having paranormal details as background, but the plot is about friendship, family and foremost is Mikey´s coming of age story, and how everybody can be the "chosen ones" and that's okay. I enjoyed reading this book.

“Not everyone has to be the Chosen One. Not everyone has to be the guy who saves the world. Most people just have to live their lives the best they can, doing things that are great for them, having great friends, trying to make their lives better, loving people properly. All the while knowing that the world makes no sense but trying to find a way to be happy anyway.”

Book trailer
Posted by Adriana C at 8:00 AM