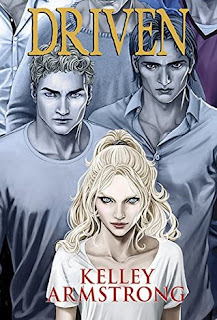 
Cains are known for being big, brutish and not-too-bright. The mutt clan embodies all the supernatural world’s worst stereotypes about werewolves. But not even the Cains deserve to be hunted down and skinned like animals.

When young Davis Cain comes to the Pack for help, Alpha Elena Michaels can’t refuse him. It isn’t about morality or justice. It’s about not letting anyone think they can do this to werewolves and get away with it.

But Elena is also dealing with the Pack’s homegrown monster—Malcolm Danvers, onetime enforcer, full-time psycho. Malcolm is now under Elena’s control, as part of the most difficult decision she’s had to make as leader. But if she has to let Malcolm in, she’s going to make full use of him…and the best person to catch monsters is one who knows exactly how they think.

I'm a fan of the Women of Otherworld series by Kelley Armstrong and I love the world where story takes place, which is in today's world but combined with the supernatural elements such as werewolves, vampires, witches, sorcerers, necromancers, half-demons, demons, etc. I am also a fan of her Darkest Powers and Darkness Rising trilogies, those too take place in the same world, but is aimed at a young audience, while the Otherworld series is for adults.

The last book in the series Thirteen was published in 2012 and I was sad to say goodbye to this series, but thanks to Kelley Armstrong and her short stories and novellas (here you can see a list of them) ... I'm still visiting the characters that I loved so much and Driven is an urban fantasy novella of 232 pages about Elena Michaels´s pack, she´s my favorite heroine of the series ..... this novella ties up loose ends related to the pack but also we get so see more of the life of the members of her pack (Clayton, Kate, Logan, Jeremy, Nick, Vanessa, Reese, Maddie, Noah, Karl, Hope and Antonio). In addition to finally know what will happen with Malcolm Danvers, Jeremy's father, a lunatic murderer that is sore spot for Elena´s pack and she must decide what to do with him once and for all.

And other part of the plot is that Elena must discover what that is hunting and killing the Cains, a family of werewolves that hates the pack and have always caused them problems, but Davis Cain, a young werewolf seeks help from the pack and she decides to help him despite how much enmity had existed between them.

One thing that I liked very much is the mention Derek Souza (briefly), which is a character of the Darkest Powers trilogy and my favorite character of that trilogy.

Driven is a novella that I enjoyed very much, just for the nostalgia of visiting once more that world, its characters and have a glimpse in their lives. As always these stories have action, mystery and funny parts. I highly recommend it for fans of the Women of the Otherworld series.
Posted by Adriana C at 9:00 AM