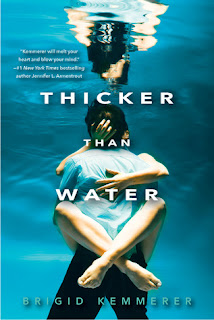 Thomas Bellweather hasn’t been in town long. Just long enough for his newlywed mother to be murdered, and for his new stepdad’s cop colleagues to decide Thomas is the primary suspect.

Not that there’s any evidence. But before Thomas got to Garretts Mill there had just been one other murder in twenty years.

The only person who believes him is Charlotte Rooker, little sister to three cops and, with her soft hands and sweet curves, straight-up dangerous to Thomas. Her best friend was the other murder vic. And she’d like a couple answers.

Answers that could get them both killed, and reveal a truth Thomas would die to keep hidden…


I´ve read and enjoyed a lot the Elemental series by Brigid Kemmerer, so I started reading Thicker Than Water with very high expectations and although it was not what I expected, I must admit that is an okay book.

Thicker Than Water is a book YA murder mystery with romance. The main plot is about the murder of Thomas's mother, she died violently in bed and only Thomas and his mother were in the house at the time and there wasn´t a sign of forced entry into the house, so due to this Thomas is the main suspect.

Thomas's mother had recently married to a police detective and a few weeks of being married and moved to a new town, she was murdered, so the funeral is full of policemen and their families that don´t like Thomas due of being a suspect. At the funeral he meets Charlotte, which has three overprotective police brothers, along with her father whom is also a policeman, so from the beginning the whole family are against Charlotte befriending Thomas, so they prohibit to speak to him, but she ignores them and strikes up a friendship/romance with him and in the course of their friendship/romance both begin to investigate possible clues of another similar murder that could help them discover what really happened that night.

The book reads most of the time as a contemporary novel, but it  has a twist with supernatural elements. The plot is slow and sometimes it feels that is dragging, but in the end I did enjoy it, but it has flaws and the ending was somewhat open for my liking.
Posted by Adriana C at 8:00 AM