Review: Tell the Truth, Shame the Devil by Melina Marchetta 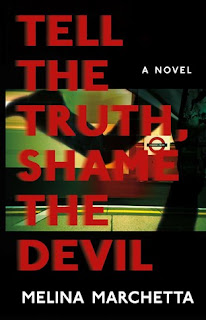 
In the wake of a devastating bombing, a father risks everything to find out who was responsible.

When Bish Ortley, a suspended cop, receives word that a bus carrying his daughter has been bombed, he rushes to be by her side. A suspect has already been singled out: a 17-year-old girl who has since disappeared from the scene.

The press has now revealed that she is the youngest member of one of London's most notorious families. Thirteen years earlier, her grandfather set off a suicide bomb in a grocery store, a bomb her mother confessed to building. Has the girl decided to follow in their footsteps?

To find her, Bish must earn the trust of her friends and family, including her infamous mother, now serving a life sentence in prison. But even as he delves into the deadly bus attack that claimed five lives, the ghosts of older crimes become impossible to ignore.

A gripping fusion of literary suspense and family drama, Tell the Truth, Shame the Devil is a fast-paced puzzle of a novel that will keep readers feverishly turning pages.

From Melina Marchetta I´ve read Jellicoe Road, Saving Francesca and The Piper´s Son, which are among my favorites and although I have not read her fantasy trilogy - Lumatere Chronicles...yet, I´ve read very good reviews of it, so that´s why when I saw her name in a new book, I didn´t hesitate to ask for her new novel for review even though I didn´t read the synopsis before I request it, because so far I haven´t been disappointed by any of her books. Tell the Truth, Shame Devil is her first adults novel and it´s a crime/mystery novel.

The story is set in the UK and France, it begins in the city of Calais, with a bomb exploding in a bus of english teenagers that were on a summer tour in France. Bish Ortley, is a police officer who is suspended from his job, and when he gets a call telling him that the bus where his teenage daughter was traveling might be the one where a bomb exploded. Bish travels to Calais to find out if his daughter was on that bus, once there, he discovers that Violette, one of the teenagers traveling on the tour is the granddaughter of the person that thirteen years before was responsible of a suicide bomb in London, which automatically makes her one of the suspects. So when she disappears, Bish is involved in the search party.

Bish is a middle-aged man, divorced, has problems with alcohol, has a teenage daughter, he´s a chief inspector, that at the time of the beginning of the book was suspended from his police work. Bish is dragged in the search for Violette, so he must visit her Violette´s mother on prison, as part of its investigation and it is during this search, that Bish begins to uncover dark truths about Brackenham Four (the name that the paper´s gave to Violette´s family) and the investigation that took place.

Something I'm not sure if I liked, is that as Bish only speaks English, some conversations (in French or Arabic) weren´t translated, unless there was some translator present at the scene, perhaps it was so we got to feel the language barrier that Bish is feeling at the moment, because many characters around him speak more than one language except for him.

Tell the Truth, Shame the Devil is a a good mystery novel that has a good main and secondary characters and I was invested in their well being, also the book covers topics such as family, racism, terrorism and other strong themes, so I recommend it for adults only.
Posted by Adriana C at 9:00 AM