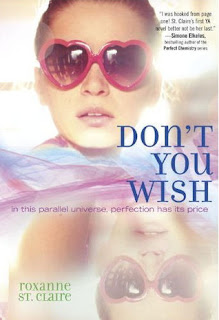 When plain and unpopular Annie Nutter gets zapped by one of her dad's whacked-out inventions, she lands in a parallel universe where her life becomes picture-perfect. Now she's Ayla Monroe, daughter of the same mother but a different father—and she's the gorgeous, rich queen bee of her high school.

In this universe, Ayla lives in glitzy Miami instead of dreary Pittsburgh and has beaucoup bucks, courtesy of her billionaire—if usually absent—father. Her friends hit the clubs, party backstage at concerts, and take risks that are exhilarating . . . and illegal. Here she's got a date to lose her V-card with the hottest guy she's ever seen.

But on the inside, Ayla is still Annie.

So when she's offered the chance to leave the dream life and head home to Pittsburgh, will she take it?

The choice isn't as simple as you think.


Annie Nutter is unpopular, she doesn´t wear designer clothes, she isn´t from a wealthy family, she has only one best friend and both belong to the invisibles at school. Annie's father is an inventor whose inventions have not been successful, her mother sells houses and she has a younger brother that she can´t stand.

One day, Annie has a bad day at school and is humiliated by the boy she likes, and later she found her mother crying reading a magazine, in this magazine there is an article about her mother´s ex-boyfriend, he´s now a millionaire and is doing pretty well. After this event Annie begins to fantasize, that would have happened if her mother had married someone else and is in the midst of her fantasy when she had an accident with one of her father´s experiments, and she´s transported to a parallel universe where her fantasy is true and now she´s Ayla a rich, beautiful and popular girl.

I really liked Don´t You Wish! Yes, it has many cliches and stereotypes at the beginning of the book about the populars and the invisibles. The first 100 pages of the book is about Ayla living the life she always dreamed of, being the popular girl, the beautiful and very rich, with a super hot boyfriend and popular bestfriends. For that could be a little shallow at first, but after a while Ayla (Annie) changes her perspective of life and realize that underneath all the glamor she is still Annie.

Annie meets Charlie a nerd who studies quantum mechanics, and can help her to return to her universe, but in the process of spending time together, feelings begin to arise between them, so that Annie is not quite sure if she wants to return home. I loved Charlie! he´s a cute boy, he falls for Annie, not Ayla.

What I liked most about this book, apart from parallel universe and quantum mechanics, etc.... is that it takes issue of what would have happened if you had done something different ...... Don´t You Wish touches on the subject, about what would have happened if Annie's mother had married her ex-boyfriend instead of her father and consequently Annie would be different and instead of having a younger brother she has an older brother.

I do recommend this book. Don´t You Wish has a very cute, sweet and believable romance and I loved the end, it was perfect.