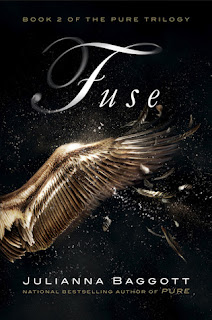 You can read my review of Pure - here.


When the world ended, those who dwelled within the Dome were safe. Inside their glass world the Pures live on unscarred, while those outside—the Wretches—struggle to survive amidst the smoke and ash.


If you have read Pure the first book in the trilogy, you'll know that this book is not a light read, in this post-apocalyptic world, where the story unfolds, it is not pretty .... is dark, creepy, bizarre, unpredictable and disturbing, but it´s very interesting, intense and has a great world-building.

Fuse begins a few weeks after the events of Pure, each of the protagonists are following with their life, until Ellery Willux decides that he wants his son back, he must return to the dome, so he launches an attack against the wretches and he will not cease until his son is returned, because he has "big" plans for him. This triggers several subplots in the story, but I will not go into detail so as not to spoiler this book, I can only say that the plot is really good and unexpected.

This book is viewed from four different perspectives or POVs of Pressia, Captain, Partridge and Lyda ... and I still think it would have been good idea at least one time include Bradwell.´s POV as well.  All these characters are easy to love and understand, but this time I liked least Lyda's character because while she is learning to be independent, "deprogramming" of her believes from the dome and making her own decisions, but sometimes I felt her very indecisive and doubting her decisions.

And something I would recommend to do before reading Fuse is to re-read Pure, because although there is a reminder of the events of the first book, there were times when I could not remember who they were referring.

Fuse is a very good second book in a trilogy and I feel that in this book we learned a little more about the characters and especially the villain - Ellery Willux, this man is really insane, he has a bizarre vision of the world and of himself. ... he has no respect for anyone's life and has a god complex. Now I cannot wait to read Burn, the last book of the trilogy and with those endings I need to know what will happen next!, I almost had a mini heart attack when I read the words "The End of Book Two".... I want (need) to know what´s going to happen to Bradwell, Pressia, Captain, Partridge and Lyda.

I do recommended this book!, but I do not think this book is appropriate for younger teens or impressionable people, because the world in which the story unfolds is cruel, scary and disturbing.

I want to thank Grand Central Publishing and Netgalley for this review copy.
Posted by Adriana C at 11:51 AM