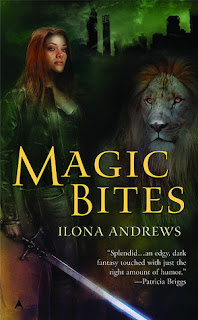 When the magic is up, rogue mages cast their spells and monsters appear, while guns refuse to fire and cars fail to start. But then technology returns, and the magic recedes as unpredictably as it arose, leaving all kinds of paranormal problems in its wake.

Kate Daniels is a down-on-her-luck mercenary who makes her living cleaning up these magical problems. But when Kate's guardian is murdered, her quest for justice draws her into a power struggle between two strong factions within Atlanta's magic circles.

The Masters of the Dead, necromancers who can control vampires, and the Pack, a paramilitary clan of shapechangers, blame each other for a series of bizarre killings—and the death of Kate's guardian may be part of the same mystery. Pressured by both sides to find the killer, Kate realizes she's way out of her league—but she wouldn't have it any other way…


I had this book on my shelf for almost a year and I had been wanting to read it for a while but there was always another book that I had to read  for a review first, but I finally read this book and  let me tell you that it was really good! Magic Bites did meet my expectations.

The book is seen from Kate Daniels´s POV, she lives in Atlanta in a post-apocalyptic world where magic and technology exist but when magic is working the technology doesn´t and vice-versa, there are shapeshifters (werewolves, werehyena, wererats, etc.), vampires, necromancers, magic users and monsters that roam the city.

Kate is a twenty-five-year-old mercenary, but at the beginning of the story her guardian is murder and she decides to investigate his death. The world where she lives it is a bit hard to explain, so I will not go into much detail about the world-building.

Kate Daniels is an excellent female protagonist, she is strong, brave, sarcastic, able to defend herself, she isn´t intimidated easily and with a very peculiar sense of humor, she always walks with her sword strapped to her back and is not afraid to use it. Other main characters is Curran, The Beast Lord, he is the King of the shifters, he is used to everyone to obey him and do whatever he says, until he meets Kate, they don´t get along at first ..... we'll see where these two end up, he´s a potential love interest.

Among the secondary characters, my favorite is Derek, he´s a werewolf, who gets into trouble when he meets Kate, but it seems that his future looks good. He is a good guy, loyal, protective and a good sense of humor, I hope to see more of him in the following books in the series.

Magic Bites is a urban fantasy novel, so there is no romance, but it hint to a future romance between Kate and one of the protagonists, but there are lots of action, mystery and suspense .... The story has a very interesting twist that I NEVER saw coming, this is a very good book and start of a series. The only thing I feel that was missing was a prologue, to understand a little more (and a bit faster) about the world, since at the beginning it´s quite odd the world where Kate Daniels lives. Now I'm hooked on this series.
Posted by Adriana C at 4:44 PM