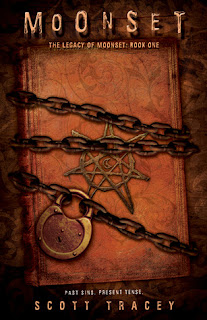 Moonset, a coven of such promise . . . Until they turned to the darkness.

After the terrorist witch coven known as Moonset was destroyed fifteen years ago—during a secret war against the witch Congress—five children were left behind, saddled with a legacy of darkness. Sixteen-year-old Justin Daggett, son of a powerful Moonset warlock, has been raised alongside the other orphans by the witch Congress, who fear the children will one day continue the destruction their parents started.

A deadly assault by a wraith, claiming to work for Moonset’s most dangerous disciple, Cullen Bridger, forces the five teens to be evacuated to Carrow Mill. But when dark magic wreaks havoc in their new hometown, Justin and his siblings are immediately suspected. Justin sets out to discover if someone is trying to frame the Moonset orphans . . . or if Bridger has finally come out of hiding to reclaim the legacy of Moonset. He learns there are secrets in Carrow Mill connected to Moonset’s origins, and keeping the orphans safe isn’t the only reason the Congress relocated them . . .

Moonset is a book that I was eager to read because I´ve read the other witches trilogy by Scott Tracey - Witch Eyes and I really like it a lot, so when I saw he was going to make another series or trilogy, immediately add it to my TBR list, and although I did not like it as much as Witch Eyes, Moonset story is very interesting and intriguing.

Moonset tells the story of Justin Daggett a seventeen years-old witch and along with his four foster siblings, had been raised by the witch Congress, a Congress that fear them and hate them because they are the children of dark witches that 15 years ago were at war against Congress and committed several terrorist acts that killed many witches and almost finished with the congress. But for some unknown reason, the coven Moonset surrendered and the whole coven was executed, leaving behind five infants, which are called Moonset. Justin and his siblings are feared because the congress fear that they will form a new coven as dangerous as that of their parents, so as part of their education they only are taught harmless spells and history about all the bad that the Moonset coven did.

The story is told from the point of view of Justin, which I liked very much, because I prefer books with male POV. Justin is the middle child, but because he´s really patient, easy-going and is always concerned about others, he´s something like the leader of the group. He and his siblings have not lived in one place for more than a few months, in fact they have moved seven times in the last three years and in every place they´ve a new guardian, appointed by the witch congress. And at the beginning of the book they move to Carrow Mill, a small town that seems to be more connected to the coven Moonset of what they expected.

Among the secondary characters are Justin´s siblings, Malcolm is the older brother, he's athletic and dislikes magic, indeed he´s the least interested in learning magic and he just wants a normal life. Then is Jenna, she´s Justin´s twin sister, she´s a trouble maker, impulsive, rebellious and is constantly angry. Then is Cole,  he´s funny and very talkative and finally we´ve Bailey youngest of the siblings, she is fifteen years-old and she´s the emotional one and the one that get attached to people and places. And then there's Quinn, the new guardian of Justin and Jenna, he´s is a young witch who might be the only one in the world interested in the welfare of the Moonset siblings.

Moonset has an interesting plot, a bit predictable, but I really enjoy the book but sometimes I felt a bit of déjà vu as it reminded me of other books, but overall I liked it! and I can´t wait to read the next book because I want to know a little more about the history of the coven Moonset and about Justin's parents.

I want to thank Flux and Netgalley for providing this eARC for review.
Posted by Adriana C at 4:21 PM