The Pledge by Kimberly Derting 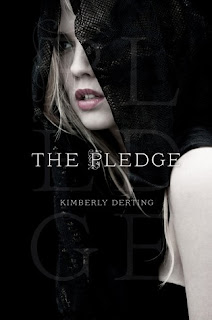 
In the violent country of Ludania, the classes are strictly divided by the language they speak. The smallest transgression, like looking a member of a higher class in the eye while they are speaking their native tongue, results in immediate execution. Seventeen-year-old Charlaina has always been able to understand the languages of all classes, and she's spent her life trying to hide her secret. The only place she can really be free is the drug-fueled underground clubs where people go to shake off the oppressive rules of the world they live in. It's there that she meets a beautiful and mysterious boy named Max who speaks a language she's never heard before . . . and her secret is almost exposed.

Charlie is intensely attracted to Max, even though she can't be sure where his real loyalties lie. As the emergency drills give way to real crisis and the violence escalates, it becomes clear that Charlie is the key to something much bigger: her country's only chance for freedom from the terrible power of a deadly regime.

I really liked The Body Finder series by Kimberty Derting, so that why I decided to read this book plus this is a dystopian novel and I love this genre.

The main character is Charlaina or Charlie, a girl living in the kingdom of Ludania, where people are divided by caste or classes and each caste speaks their own language. It´s is forbidden and punishable by death to speak a language that don´t belong to your caste (except for the englaise). So Charlie must keep secret her "gift", since she can understand and speak every language in the kingdom, so she must be alert and don´t react to another language other than that of her caste . She was born into the vendor class and her family own a restaurant, she works there and there is where she first sees Max, a soldier ... and he will be the love interest of Charlie.

My favorite characters in this book are Max, and although I'm a little tired of love at first sight or instant-love ... but I liked him. Another character that I really liked is Xander, he helps Charlie in various situations, but do not panic there is NO love triangle in history. And I also liked the character of the evil Queen Sabara, she falls under the wicked queen stereotype, psychotic and she wants snatch "something" of the main protagonist of the story.

The story is in the genre of dystopian novels, but it also felt a bit like epic fantasy and has paranormal elements. I liked the story in general, but there was something missing in it. And I did not see the logic (And at least for me, everything is possible and believable when I read a fiction book), but each class had its own language, supposedly because the queen don´t want that the people unite and overthrow her kingdom, but they still have a base or universal language that is the englaise, which is the language of servants and everyone speak it. So each person speaks the language of their social class plus the englaise, this for when the people need to talk to someone outside of their class.

I enjoyed this book, but I felt something was missing and there are several parts of the plot that are a little predictable, but I liked the ending, because there is no cliffhanger and to some extent this book could be a standalone.
Posted by Adriana C at 5:30 PM