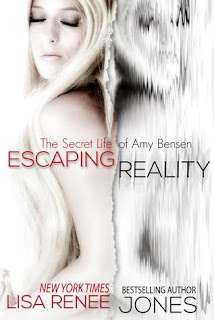 His touch spirals through me, warm and sweet, wicked and hot. I shouldn’t trust him. I shouldn’t tell him my secrets. But how do I not when he is the reason I breathe? He is what I need.

At the young age of eighteen, tragedy and a dark secret force Lara to flee all she has known and loves to start a new life. Now years later, with a new identity as Amy, she’s finally dared to believe she is forgotten–even if she cannot forget. But just when she lets down her guard, the ghosts of her past are quick to punish her, forcing her back on the run.

On a plane, struggling to face the devastation of losing everything again and starting over, Amy meets Liam Stone, a darkly entrancing recluse billionaire, who is also a brilliant, and famous, prodigy architect. A man who knows what he wants and goes after it. And what he wants is Amy. Refusing to take “no” as an answer, he sweeps her into a passionate affair, pushing her to her erotic limits. He wants to possess her. He makes her want to be possessed. Liam demands everything from her, accepting nothing less. But what if she is too devastated by tragedy to know when he wants more than she should give? And what if there is more to Liam than meets the eyes?

Escaping Reality captivated me from the first chapter, is a story that grabs you and does not let go until the end, this is a New Adult novel and so far I hadn´t read a book of this genre with such intrigue, suspense, mystery and that made me doubt of everyone. I have several theories about who is bad guy and who is not but all my doubts will be resolved to the next and final book of this Duology.

The story is told entirely from the point of view of Amy, a girl of 24 years-old who has been running the last 6 years, because someone is after her .. who is after her and why? that is something I hope to know in the next book! Amy has a mysterious handler that monitors her and try to keep her safe and tells her when she must move to another city and where to go and he provides her with the basics to start a new life.

Running from the last city she meets Liam Stone a billionaire to whom she is attracted and he causes her to lose all her reservations about letting anyone near her. And besides Liam is very attractive, very persistent, very dominant guy and he doesn´t take a no for an answer and ends up breaking some of the barriers that Amy erected around her, so the romance is very interesting and hot.

But what I liked most was the intrigue, since in each chapter I doubted of someone different and that ending left me desperately wanting the next book and I hope that Infinite Possibilities will answer all the questions I have about several characters. I highly recommended this book for those who like New Adult Novels.


Thanks to Julie Patra Publishing for providing this eARC in exchange for an honest review.
Posted by Adriana C at 6:30 PM