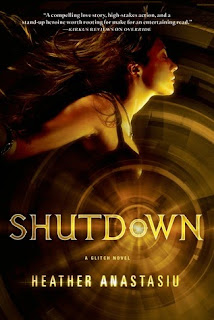 You can read my review of Glitch - here and Override - here


The battle is all but over, and hope seems to be lost. Zoe and her fellow Resistance fighters are on the run, having lost their home, their protection, and their leader. They are outnumbered and outmatched by the powerful corporation that controls the world, and the cruel Chancellor is inches away from completing a scheme that would kill most of humanity. Zoe's only remaining option is to chase the impossible dream of upending the Link system, freeing the world from the hardware that controls their thoughts and emotions, and hope it will trigger a revolution.

The plot requires a nearly impossible mission to infiltrate the dangerous Community, and it is a task that Zoe must unfortunately complete alone. With challenges and surprises at every turn, nothing goes according to plan. Adrien's visions of the future now show two possible outcomes: one in which they succeed, and one in which humanity falls. It all lies in Zoe's hands.

After reading Override, I had my doubts about if this book was going to meet my expectations, because at the end of the previous book Zoe and Adrien were not in a good place and it looked that it would be hard to for them to recover what they lost, but this book really surprised me ... I liked how the romance was handled between the protagonists and although the solution is not what I expected or wanted, but I liked how the author handle the romance and they could achieve the closest to a happy ending, that was since my main concern in this book was the romance between Adrien and Zoe, the small matter of World Domination and enslavement of humans without special powers by the Chancellor could wait or take the back seat (at least to me).

Overall I liked the Glitch trilogy, the books were improving and each book is better than the last and Shutdown was WOW ... the action scenes are great, especially because they involve human with special powers like X-Men (which is what that I can compare to), the powers of Zoe (she's telekinetic) are increasing, and the powers of those on her team: there is a shapeshifter, other can burn just by touching them, a girl that can find the location of anyone, anywhere in the world and a girl who can give electric shocks, so because of this the final battle is full of epic action and the epilogue is great because it is months after the battle and we can see what is happening with the characters and where is the world going after the Shutdown.

I do recommend this trilogy to fans of dystopian and science fiction books.


Thanks to St. Martin's Griffin for providing this eARC in exchange for an honest review.
Posted by Adriana C at 11:00 AM