Review: The Girl of Fire and Thorns by Rae Carson 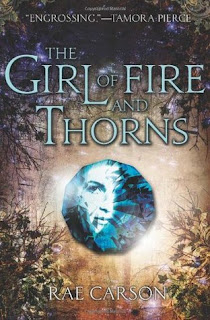 
Once a century, one person is chosen for greatness.
Elisa is the chosen one.

But she is also the younger of two princesses, the one who has never done anything remarkable. She can't see how she ever will.

Now, on her sixteenth birthday, she has become the secret wife of a handsome and worldly king—a king whose country is in turmoil. A king who needs the chosen one, not a failure of a princess.

And he's not the only one who seeks her. Savage enemies seething with dark magic are hunting her. A daring, determined revolutionary thinks she could be his people's savior. And he looks at her in a way that no man has ever looked at her before. Soon it is not just her life, but her very heart that is at stake.

Elisa could be everything to those who need her most. If the prophecy is fulfilled. If she finds the power deep within herself. If she doesn’t die young.

Most of the chosen do.


I haven´t read a lot of epic fantasy books, I usually read more contemporary, paranormal and dystopian novels, so I don´t have much experience with this genre, so the stories I've read so far they seem original to me.

The Girl of Fire and Thorns has been on my shelf for more than two years, but it didn´t appeal to me until I saw that the last book of the trilogy was going to be published next month and I've seen some very good reviews with good rating ..... that´s why I decided to read it and I loved it!

The Girl of Fire and Thorns tells the story of princess Elisa, a girl who is the bearer of the godstone, this is an honor that only happens every 100 years and the bearer has to perform a service of heroism. And the day she turns 16 years old, she marries King Alejandro de la Vega, a widower who is very handsome. But what Elisa does not know is that being a bearer of the Godstone will take her on a journey where there will be danger, she will find love, make friends and at the end she will no longer be the same.

The story is told from the point of view of Elisa, a girl who at the beginning of the story is very insecure and has overweight, but as the story progresses she starts to be a little more sure of herself and begins taking decisions that affect her life and the lives of those who seek her help.

Overall, it´s a very good epic fantasy book and I recommend it for those who like this genre; it has some romance, action and intrigue. And what I liked the most was how Elisa changes over the course of her journey and at the end she´s a great heroine, independent, strong and determined.
Posted by Adriana C at 1:30 PM