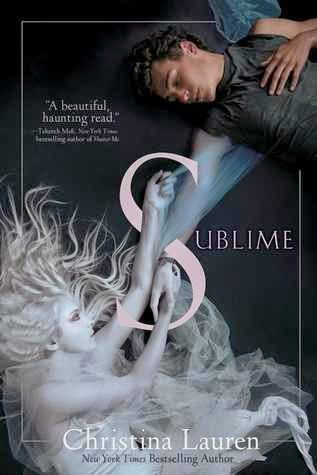 When Lucy walks out of a frozen forest, wearing only a silk dress and sandals, she isn’t sure how she got there. But when she sees Colin, she knows for sure that she’s here for him.

Colin has never been captivated by a girl the way he is by Lucy. With each passing day their lives intertwine, and even as Lucy begins to remember more of her life—and her death—neither of them is willing to give up what they have, no matter how impossible it is. And when Colin finds a way to physically be with Lucy, taking himself to the brink of death where his reality and Lucy’s overlap, the joy of being together for those brief stolen moments drowns out everything in the outside world. But some lines weren’t meant to be crossed…


This novel is about a little bit twisted love story between ghost and a boy, about the constant struggle between them to feel close, the need touch each other, how they are connected and find out why she's really there (of which I'm still not entirely sure).

The story takes place in a boarding school that has a reputation for being haunted, everybody know the stories about their ghosts and tragedies that have happened there. This is where one day a girl wakes up with not recollection of whom she is or how she got there, all she knows is that she feels a force that guides her to Colin and seeing him for that first time she knows that she is there for him. And after their first meeting a romance between them arises, meanwhile she slowly starts to remember her name, what really happened to her before? and she tries to find out why is she really there?.

There were many aspects of the story that kept me interested, as was the fact that there were legends about walkers (ghosts) in the boarding school, also the things that Colin does to be near her and that is told from a dual POV. But I also feel that it was not well explained why the walkers appear in the school (it was sort of explained at the end of the book, but it remained slightly inconclusive at least for me) and there were times when I didn´t like Lucy and there were some loose ends with her character.

Sublime wasn´t what I was expecting, is primarily a twisted love story with mystery in it, but I didn´t enjoy the insta-love and codependency between them, I feel that the character of Lucy didn´t contribute much to the story because she was too passive. And it wasn´t a very good ending (at least from my perspective).