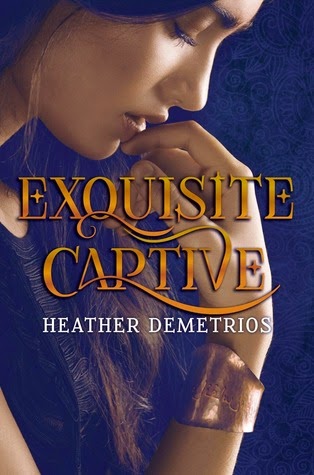 
Forced to obey her master.
Compelled to help her enemy.
Determined to free herself.

Nalia is a jinni of tremendous ancient power, the only survivor of a coup that killed nearly everyone she loved. Stuffed into a bottle and sold by a slave trader, she’s now in hiding on the dark caravan, the lucrative jinni slave trade between Arjinna and Earth, where jinn are forced to grant wishes and obey their human masters’ every command. She’d give almost anything to be free of the golden shackles that bind her to Malek, her handsome, cruel master, and his lavish Hollywood lifestyle.

Enter Raif, the enigmatic leader of Arjinna’s revolution and Nalia’s sworn enemy. He promises to free Nalia from her master so that she can return to her ravaged homeland and free her imprisoned brother—all for an unbearably high price. Nalia’s not sure she can trust him, but Raif’s her only hope of escape. With her enemies on the hunt, Earth has become more perilous than ever for Nalia. There’s just one catch: for Raif’s unbinding magic to work, Nalia must gain possession of her bottle…and convince the dangerously persuasive Malek that she truly loves him. Battling a dark past and harboring a terrible secret, Nalia soon realizes her freedom may come at a price too terrible to pay: but how far is she willing to go for it?

Inspired by Arabian Nights, EXQUISITE CAPTIVE brings to life a deliciously seductive world where a wish can be a curse and shadows are sometimes safer than the light.


Exquisite Captive is a novel about the jinnis, magical creatures belonging to the Arabian mythology, the plot develops slowly and describing the jinni´s world, castes and ruling goverment, but the story is set in present-day Hollywood (with magical elements), but through flashbacks we get to see Arjinna, the jinni´s homeland. Also at the beginning the jinni´s castes are described, which are five and of these four castes each draws their power from an element, either water, air, fire and earth and there is a breed that is the one that ruled them because they could get power of all the elements, this caste was known as the Ghan Aisouri and its only survivor is Nalia.

Nalia is a jinni that was captured, imprisoned in a bottle and sold by the Dark Caravan- that those who are trafficking jinnis - her new master Malek, he´s one of the most powerful men on earth. Malek has already ask for his first two wishes, but he doesn´t intend to ask his third his third and final wish because he isn´t willing to lose Nalia, so that he never intended to ask his third wish and wants to keep her with him forever. So when Raif comes into her life and offers to free her on one condition, she´ll tell him the location of a powerful artifact that could help win the war but also could be dangerous to the people of Arjinna. So in order to be free Nalia needs to get the bottle that always hung on Malek´s neck and one that he never takes off in her presence, so to get it she must seduce him.

For my taste I felt that the books was a little bit long, the story is told from the point of view Nalia, Raif and the villain, which I felt could had been shorter because I skip read the villians POVs.

Overall, what I liked most was that it was about jinnis, this is the first book I´ve read where the main character is a jinni, which was refreshing. As I previously mentioned the plot develops slowly, it has almost no action, but there is romance. Something I'm interested to see in the subsequent books is how it´s going to be handle the love triangle.