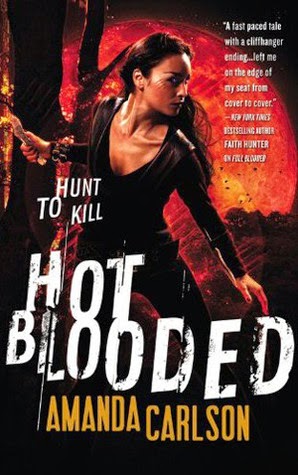 You can read my review of Full Blooded - here


It hasn't been the best week for Jessica McClain.

Her mate has been kidnapped by a Goddess hell-bent on revenge --- but Jessica is playing for keeps.

Because she's the only female werewolf in town...it comes with its own set of rules...and powers.

Aided by two vamps, two loyal Pack members, and one very reluctant human, Jessica must rescue her man while coming to terms with what being a wolf really means.

All in a day's work for a girl.

The second novel in the Jessica McClain series is a full on action adventure featuring one angry Goddess and plenty of monsters, demons, and a few newly risen beasties...

After Full Blooded´s ending, I needed to read its sequel immediately, because at the end of the previous book someone important in the life of Jessica is kidnapped by a goddess, so she makes plans and and a pact with a Queen to receive aid to get help in her search. So Hot Blooded starts with Jessica, getting ready to go to get her mate back, and her companions are Tyler, Danny, two vampires and a human.

Although I was desperate for Jessica to rescue her mate as soon as possible, her whole journey felt something like the movie Clash of the Titans or any other story about some epic mythology where they must face various mythical creatures, demons and other obstacles to reach the lair of the Goddess, and once there they have to face more obstacles and not all her companions make it out alive at the end of that journey.

The plot had me hooked and waiting to know what would happen next, because every time there was something hidden or lurking trying to stop Jessica to reach her destination. Also during the trip she slowly discovers something new about her new powers as werewolf.

Overall, I really liked Hot Blooded because it was full of adventure, action, very likable characters and the world where the plot unfolds continues to expand and continue introducing new characters and paranormal races. This book is highly recommended for fans of urban fantasy.
Posted by Adriana C at 8:00 AM