The Eternity Code by Eoin Colfer 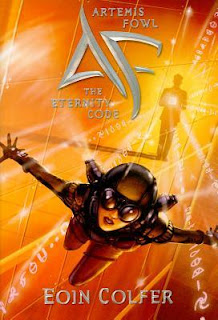 Artemis Fowl is going straight. As soon as he pulls off the most brilliant criminal feat of his career.

At least, that's the plan when he attempts to sell his C Cube, a supercomputer built from stolen fairy technology. When his efforts to broker a deal for the Cube with a powerful businessman go terribly wrong, his loyal bodyguard and friend Butler is mortally injured. The only thing that will save him is fairy magic, so once again he must contact his old rival, Holly Short.

It's going to take a miracle to save Butler, and Artemis's luck may have just run out.

In The Eternity Code, Artemis is 13 year-old and his character has grown a lot emotionally, he is not as cold as before, and shows a bit more his feelings and is seriously thinking to withdraw from the criminal world. So he decides to make his last business, which involves a supercomputer that he called the C Cube, that technology is ahead of its time and currently impossible without the help of the technology that he and Butler had "taken" from the fairies. Artemis has it all figured out and is a business that can not go wrong, but he could not be more wrong, as he is beaten at his own game and Butler is mortally wounded and can only be saved with the healing magic of the fairies, that is if the Captain Holly Short is able to reach them before it is too late.

In The Eternity Code we meet again with characters we already know like elves, Captain Holly Short, Julius Root commander, the centaur Foaly, the dwarf kleptomaniac Mulch Diggums and Artemis´s bodyguard and friend Butler. My favorite character in the series so far is Butler, which I "saw" hardly enough in this book because it is injured .. so we meet again with Juliet Butler (she was introduced in the first book), Juliet is Butler's younger sister and she comes along to help and protect Artemis.

Once again Artemis and Holly Short join forces to recover the C cube, which could cause much damage in the wrong hands.

I loved this book! The Eternity Code is a page turner with adventure and action; it´s funny and sarcastic. I really liked this book, I recommend it.


“And one more thing. About my name — Artemis — you were right. In London, it is generally a female name, after the Greek goddess of archery. But every now and then a male comes along with such a talent for hunting that he earns the right to use the name. I am that male. Artemis the hunter. I hunted you.”