The Opal Deception by Eoin Colfer 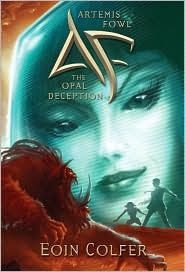 The evil pixie Opal Koboi has spent the last year in a self-induced coma, plotting her revenge on all those who foiled her attempt to destroy the LEPrecon fairy police. And Artemis Fowl is at the top of her list.

After his last run-in with the fairies, Artemis had his mind wiped of his memories of the world belowground. But they have not forgotten about him. Once again, he must stop the human and fairy worlds from colliding - only this time, Artemis faces an enemy who may have finally outsmarted him.

This is the fourth book in the Artemis Fowl series, if you have not read the saga can read the review of the first Artemis Fowl, the second book The Arctic Incident and the third book The Eternity Code.

**May contain spoilers if you have not read the previous books **
In the previous book, the fairies decided to wipe all the memories that Artemis and Butler had about the fairies world. Artemis is now 14 year-old  and has returned to his old ways and is immersed again in the criminal world.

While Artemis is planning and executing his next crime, stealing a valuable painting; in the underground world the pixie Opal Koboi, that for the past year was in an induced coma, escapes from her guards and decides to take revenge on those that frustate her plans, Artemis, Butler, Holly, Foaly and Commander Root. But she do not settle for just vengeance of them, but she also plans that humans know of the existence of the fairy world.

In The Opal Deception, Artemis once again join forces with Holly and company to stop Opal. But there is only one small problem, Artemis and Butler do not remember anything about the faery world, or anything related to them, so that the interactions between them at first awkward. For her part, Holly is framed of murder and is considered a fugitive, so all in all they will also try to clear her name.

I really liked The Opal Deception, and I must say it was a shock to me the death of a character which I had come to love, I was in denial most of the book. This book as usual in this series has action, adventure and a couple of surprises.

And I must say that despite being a bit sadder than the previous books,  I end up with a smile from ear to ear with the end of this book (not the epilogue), I liked Artemis reaction at the end. I highly recommended it!
Posted by Adriana C at 3:12 PM