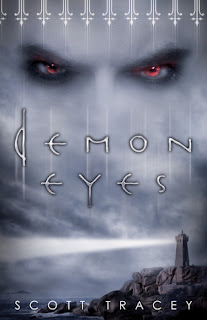 
Demons don't die without a fight...

After destroying the demon Lucien, Braden—son of Belle Dam’s most powerful warlock, Jason Thorpe—doesn’t need the power of his witch eyes to see that everything in his life is turning against him: friends, family, and even his visions. When disturbing nightmares of Lucien’s return haunt him, Braden discovers that the simmering feud between the city’s two witch dynasties is fast approaching its explosive boiling point.

While struggling to come to terms with his attraction to Trey, Catherine Lansing’s son who should be his mortal enemy, a diabolical plan starts to unveil before Braden’s eyes. Young women are disappearing from Belle Dam, and as he investigates, Braden is forced to explore the dangerous unknown power within himself. But when the truth about his family is revealed, Braden must pay a terrible price.

In Demon Eyes, Braden is tormented by the fact that he killed Lucien, no matter that he was evil and a demon (literally), merely knowing that he was capable of murder brings very real nightmares that will not let him sleep and even imagines that he can see him even awake. Besides is the fact that Trey, the guy Braden likes is not speaking to him (because they are mortal enemies, because their parents are mortal enemies), also her best friends Jade and Riley keep their distance from him, the only one still around of him is Drew, he helps him with his investigation about the girls that are disappearing and they could have some link with him.

My favorite character in this book is Drew! He's sarcastic, strong and likes to rile Trey so he flirts with Braden only in front of Trey. Braden's character was further developed in this book and he´s suffering for all that is happening with Trey, Riley, Jade, his father Jason who wants to "fix" him, and his uncle John, so he changed a bit and had an interesting twist in the story. Meanwhile Trey (I still don´t like him) finally begins to question his mother.

I really loved Demon Eyes, is a novel from that hooked me from beginning to end, the story flows and has a good pacing, has suspense, some predictable plot twists and some not so predictable, a sad part (that I wasn´t expecting), many paranormal elements and minor cliffhanger (sad and left me with more questions) and little bit darker, I will definitely read the next book in the trilogy - Phantom Eyes.

I highly recommended this book if you like paranormal thrillers where the romance is not the main element.

I want to thank Flux and Netgalley for this review copy.
Posted by Adriana C at 9:00 AM