The Time Paradox by Eoin Colfer 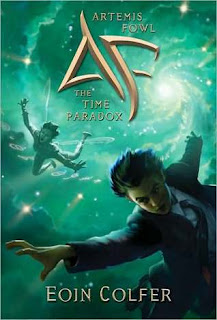 When Artemis Fowl's mother contracts a life-threatening illness, his world its turned upside down. The only hope for a cure lies in the brain fluid of the silky Sifaka Lemur. Unfortunately, the animal is extinct, thanks to the money-hungry deeds of a younger Artemis.

Though the odds are stacked against him, Artemis is not willing to give up. With the help of his fairy friends, the young genius travels back in time to save the Lemur and bring it to the present. But to do so, Artemis will have to defeat a maniacal poacher, who has set his sights on new prey: Holly Short.

The rules of time travel are far from simple, but to save his mother, Artemis will have to break them all...and outsmart his most cunning adversary yet: Artemis Fowl, age ten.


This is the sixth book in the Artemis Fowl series, if you have not read the series, you can read the reviews of the first book - Artemis Fowl, the second book - The Arctic Incident, the third book - The Eternity Code, the fourth book - The Opal Deception and the fifth book - The Lost Colony.

**May contain spoilers if you have not read the previous books **
The Time Paradox book is one of my favorites of the series, in this book we see a more vulnerable Artemis, not as in control of the situation as usual and willing to do anything to save the life of his mother (okay, he´s always willing to cheat, steal, lie, kidnap, etc. to get what he wants, but lately he has developed a conscience). His mother has a rare disease that affects only the fairies and can only be cured by the brain fluid of a lemur that died five years ago and that Artemis himself had a hand in the extinction of the lemur. So Artemis has to travel back in time and recover the lemur before it is exterminated. So now a 14 year-old Artemis will have to face a10 year-old  Artemis in order to save the life of his mother, which is not an easy task because ten year-old.Artemis thinks exactly like hem, but it's a little more devious.

In The Time Paradox Artemis is 14 year old and through the previous books we saw him grow emotionally, develop a conscience, leave his criminal past behind (or at least try), try to take into account the feelings people and trust on his friends and allies; so now he must face off against his younger self and that Artemis is a criminal mind, somewhat obnoxious and very similar in character as we knew it in the first book of the series, is not easy because Artemis 10 years only play dirty.

One thing I liked was that I could see in the memories of Artemis that was what triggered his change as a child to become a criminal that we met at the beginning of the series, obnoxious and unforgiving. And I could also see and compare the great change in Artemis´s character.

In The Time Paradox, Captain Holly Short returns to assist Artemis with his rescue mission. This pair get closer in this adventure and I´m intrigued about what is going to happen with them in the following books.

I really liked this book and feel it was more emotional than the others, but without losing what has characterized this series - the adventure and the humor. I loved The Time Paradox! is one of my favorites so far.

He was not beaten yet - far from it. He intended to cross swords with his ten year-old self again just as soon he possibly could. If anything, the boy´s mocking speech had fueled his determination. Remember the pain? thought Artemis. I hate myself. I really do.

Had he always been this obnoxious? How tiresome. Little wonder people in general did not like him.

“I am charging you with the protection of my mother and friends, not to mention keeping my younger self off the Internet. He is as dangerous as Opal.”