The Lost Colony by Eoin Colfer 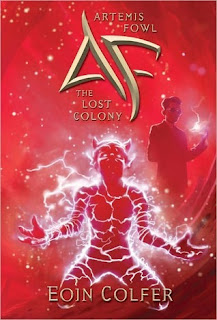 Demons are beginning to materialize without warning on Earth. If humans were to capture one, all fairies would be exposed. In order to protect themselves, the fairies must decipher complicated equations to determine where the next demon will appear. Not even the brilliant Foaly can make heads or tails of the formulas - but he knows someone who can: Artemis Fowl.

When a very confused demon imp appears in a Sicilian theater, Artemis is there to meet him. But he is not alone. Someone else has unlocked the secrets of the fairy world...and she is only twelve years old. Now, in a race against time, a newly reformed Artemis Fowl will have to dip into his bag of dirty tricks if he is to save his fairy friends from his latest nemesis, not to mention a power-hungry demon warlord who is poised to invade Earth's dimension with his savage army.


This is the fifth book in the Artemis Fowl series, if you have not read the series, you can read the reviews of the first Artemis Fowl, the second book The Arctic Incident, the third book The Eternity Code and the fourth book The Opal Deception .

**May contain spoilers if you have not read the previous books **


The story begins in Barcelona, Spain where Artemis and Butler are waiting for someone that should arrive in a few minutes, when the person doesn´t arrive Artemis and company decide to leave when suddenly appears out of nowhere a demon that takes Artemis to another time, but thanks to Butler and that he had a hand on Artemis´s shoulder and he is wearing a silver bracelet that anchors the, to the current time, so Artemis make it back in time, almost intact.The plot of this book focuses on demons (relatives of the fairies) that over 500 years ago moved to another dimension, because they did not want to live underground as do the fairies, but now their world is unstable and is beginning to cast out demons around the world and this can expose the fairies to the human world. So Artemis will again join forces with Holly to once again save the faerie world from being exposed so they can continue living in secret from the human world.Now fourteen year old Artemis is trying to become a better person and let his bad habit behind, his criminal ways. Something that I found funny is see Artemis fighting his teen hormones since apparently this distract him very much. This time his opponent is a twelve year old genius girl. Minerva wants to expose the faeries to the world and Artemis must stop her.


Artemis rubbed his temples. "It's this blasted puberty, Butler. Every time I see a pretty girl, I waste valuable mind space thinking about her."

The Lost Colony as usual in the Artemis Fowl series has action, adventure and has its funny parts and the friendship between Artemis and Holly grows even though the rest of the fairies remain distrustful of him. I really liked this book, I do recommended it.
Posted by Adriana C at 5:24 PM