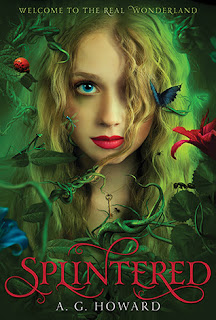 
Alyssa Gardner hears the whispers of bugs and flowers—precisely the affliction that landed her mother in a mental hospital years before. This family curse stretches back to her ancestor Alice Liddell, the real-life inspiration for Lewis Carroll’s Alice’s Adventures in Wonderland. Alyssa might be crazy, but she manages to keep it together. For now.

When her mother’s mental health takes a turn for the worse, Alyssa learns that what she thought was fiction is based in terrifying reality. The real Wonderland is a place far darker and more twisted than Lewis Carroll ever let on. There, Alyssa must pass a series of tests, including draining an ocean of Alice’s tears, waking the slumbering tea party, and subduing a vicious bandersnatch, to fix Alice’s mistakes and save her family.

She must also decide whom to trust: Jeb, her gorgeous best friend and secret crush, or the sexy but suspicious Morpheus, her guide through Wonderland, who may have dark motives of his own.


Splintered I loved it! I must say that I have not read Alice in Wonderland by Lewis Carroll, so I have no idea about the original story, my experience with this story, is Disney´s cartoon and Tim Burton´s movie, and Splintered resemble the latter.

This story is dark, with enough mystery and several twists in the story that WOW. Splintered tells the story of Alyssa, a girl who is the great granddaughter of Alice Liddell, the girl in which supposedly was based Lewis Carroll book - Alice in Wonderland. Alyssa is a girl that hears the insects and plants talk, and apparently her mother, who is in a psychiatric hospital, heard them too, so Alyssa is sure that she´s going insane just like her mother , like her grandmother, like all the women of the family, so Alyssa does what she can do to ignore what is happening to her until she´s forced to confront it, since her mother's mental health gets worse and Alyssa discovers that maybe the story of Alice in Wonderland is more real than she expected and that she can do something to help her mother and herself, but that she must visit wonderland and correct the mistakes that Alice made. And there she will realize that Wonderland is a dark and sinister world, much more terrifying than the one Lewis Carroll described in his book.

The main characters of the story are Alyssa, Jeb and Morpheus and yes! we have a love triangle: Alyssa is a girl that apart of hearing the whispers of insects and plants, she´ss somewhat normal, not popular, but she isn´t an outcast, has two best friends, Jen & Jeb, and she has a crush on the latter. Jeb is a good guy, he and Alyssa had been friends for several years and they usually do everything together, but until the beginning of the story, there is no romantic feelings between them (or so it seems), but regardless of the romance, they completely trust each other and know each other very well. And to complete the love triangle we´ve Morpheus, a mysterious character, also Alyssa´s "childhood" friend and he aids her in wonderland, but his true intentions are unclear for most part of the story. I loved how Morpheus was described, he looks like Brandon Lee from "The Crow" (in the author's Pinterest you can get an idea about Morpheus - here).

Splintered is a book that I loved, I recommend it, even if you didn´t like Alice in Wonderland (Disney´s version, like me). It's a very dark story and more similar to Tim Burton´s movie, where Wonderland is very sinister, dark and very deadly. And although so far it appears that a single book, the end was a little open, and so I hope there is a second book.

I want to thank Amulet Books and Netgalley for this review copy.