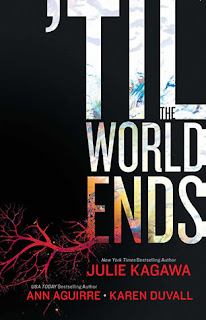 Dawn of Eden by Julie Kagawa
Before The Immortal Rules, there was the Red Lung, a relentless virus determined to take out all in its path. For Kylie, the miracle of her survival is also her burden-as a doctor at one of the clinics for the infected, she is forced to witness endless suffering. What's worse, strange things are happening to the remains of the dead, and by the time she befriends Ben Archer, she's beginning to wonder if a global pandemic is the least of her problems....

Thistle & Thorne by Ann Aguirre
After a catastrophic spill turns the country into a vast chemical wasteland, those who could afford it retreated to fortresses, self-contained communities run by powerful corporations. But for Mari Thistle, life on the outside-in the Red Zone-is a constant struggle. To protect her family, Mari teams up with the mysterious Thorne Goodman. Together, they'll face an evil plot in both the underworld of the Red Zone and the society inside the fortresses that could destroy those on the outside...for good.

Sun Storm by Karen Duvall
Sarah Daggot has been chasing storms since she was a child. But after the biggest solar flares in history nearly destroy the planet, she becomes a Kinetic, endowed by her exposure to extreme radiation with the power to sense coming storms-in the cosmos and beyond. And she's not the only one. Sarah believes the Kinetics are destined to join forces and halt the final onslaught of the sun. She'll vow to keep trying to convince the one missing link in their chain of defense, the enigmatic Ian Matthews, up until the world ends.


I´ve read the three stories and all of them are post-apocalyptic and I liked some more than others so I can not give an overall rating, so I will give separate ratings.

Dawn of Eden by Julie Kagawa
I decided to read this anthology mainly by this novella, last year I read The Immortal Rules and  I LOVED it and when I saw that its prequel was included in this anthology, I could not resist this book.

Dawn of Eden begins several years before The Immortal Rules, before the existence of vampires was known and they make their "cities", when the Red Lung epidemic is killing people and we see through Kylie´s, one of the first cases of virus mutation and the creation of the "rabids".

I liked this story but I was hoping that this story happened in the laboratories where the mutation of the virus happen and to got to see Kanin ..... but the beginning of the story takes place in the clinic where Kylie works and the plot follows her and Ben Archer, but despite this I loved it! especially because Kanin makes a cameo!

I highly recommended this novella for fans of The Immortal Rules and Julie Kagawa, this story gives us a background about the rabids.

One detail I should mention is that there is a sex scene not recommended for younger readers.

Thistle & Thorne by Ann Aguirre
This is the first time I´ve read a story written by Ann Aguirre and let me say that I really enjoyed this novella, I did not know what to expect from the story, but I definitely want to read more by this author! this story is really good.

Thistle & Thorne tells the story of Mari Thistle a girl that live outside of the gated communities in the red zone where everyone is struggling to live day by day and until one day she meets Thorne Goodman offered to join forces and help each other by a common good.

I really liked this novella, the post-apocalyptic world in which they live is very dark and a little bit depressing, but it's definitely a very good story.

Sun Storm by Karen Duvall
It is also the first time I´ve read a story written by Karen Duvall and the synopsis sounds very promising, but it didn't live up to my expectations, the book was a bit slow at times and I feel like the ending was rushed.

Sun Storm tells Sarah´s story, she´s living in a post-apocalyptic world where sun storms are destroying the world as we know it, the storms are deadly and the few people that survive them develop super powers. Sarah is a survivor and she can predict storms and for some reason she need to chase storms to recharge her energy and she also alert people that a storm is on the way.

Sun Storm is my least favorite novella of the book, I felt something was missing, I didn’t connect with the story nor the characters.

I want to thank Harlequin Luna and Netgalley for this review copy.
Posted by Adriana C at 10:29 PM

Email ThisBlogThis!Share to TwitterShare to FacebookShare to Pinterest
Labels: Blood of Eden, Review